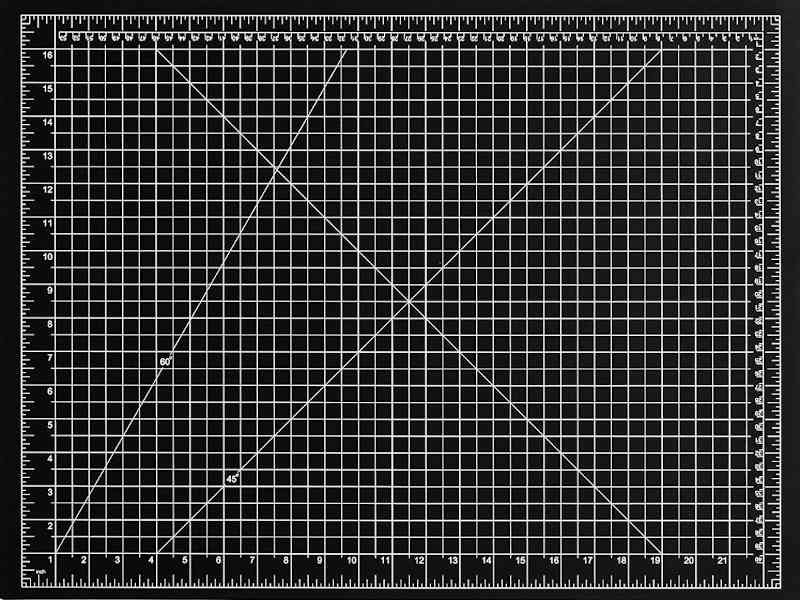 A completist does not like a task to be left incomplete and tends to do things like, for example, read a book cover-to-cover to include all the bits so many people skip: frontmatter, table-of-contents, all the good stuff in the middle, and then even the backmatter, to include even the notes and indices to some degree. A completist also doesn't like to NOT finish projects, etc. Once started that is.

A perfectionist on the other hand likes lines to be straight, clutter in order or cleaned up, trash to be tossed, etc. A project doesn't necessarily have to be complete, but it has to be "right." Is that period supposed to be before or after the quotation mark? for example. This will eat at the perfectionist.

A perfectionist recoils at a task half-assed; a completist, intolerant of a task half-done.

Combine these things and such a person invariably tends to procrastinate. A perfectionist avoids starting projects because they are weighed down by the obligation to do the project "correctly" in the first place. Projects always take longer than they would with a "git 'er done!" non-perfectionist and can be exhausting with the obsession with nit-picking correctness. And a completist avoids starting projects because they are burdened with the requirement to finish. In both cases, avoidance is simply easier. Completist perfectionism just compounds the tendency to procrastinate. Starting is avoided and any substantial disruption will stop a project cold. A restart becomes a "start" once again—literally a re-start—versus merely a continuation.

I've been writing a novel for some time now. Thus far, I have written what I think is a killer opening and a healthy bit narrative setup. That leads to an inciting moment, but which is written rather messily. Beyond that, I have a whole pile of notes for what might become the midpoint and climax, some of the other characters, and the world situation. And that is just about it. I got that far and then this happened:

I hit a wall somewhere after the novel's presumed inciting moment. I just didn't know where to take the characters after that and my sketched out ideas were so very dull.

I was stuck. I wrote a lot of stuff that ended up being tossed out and I felt I was getting nowhere. After a bunch of false starts, I figured it was time to change tactics.

Outlining. I figured it was maybe time to step back and examine the big picture view of the story. In a prior life, I was a software engineer after all. A software project of any scale, if it every hopes to be successful, starts with an idea; then is articulated into more concrete, but broad epics; workflows are sketched-out; and then user stories (what if's); and then finally, design, tasks (scenes), etc . . . You get the idea: A large idea is broken into smaller bits. Lots of authors write their novels (first draft) from beginning to end without an outline and hardly any predetermined structure (pantsers, i.e., by the seat of their pants). Well, that worked for me, until it didn't.

I needed help. Time for some research. I picked up a pile of books on storytelling and structure. Some were a bit "fluffy" in their approach, but still helpful. Others were good reads, but not overly helpful: Stephen King's On Writing comes to mind. But others were super helpful: Writer's Digest's The Complete Handbook of Novel Writing was particularly helpful and covered many many topics. How to Write a Novel using the Snowflake Method may be the best I have found on process. For help with structure, Into the Woods is my current favorite, though Save the Cat! was also very good, if a bit conflicting with the former (Save the Cat! was also a bit too cute on occasion). I am just starting to review some of K. M. Weiland's books on outlining and structure. She is often touted as the Queen of Structure, and if her insightful blog (and associated podcast) is any indication, I suspect that title is well deserved. 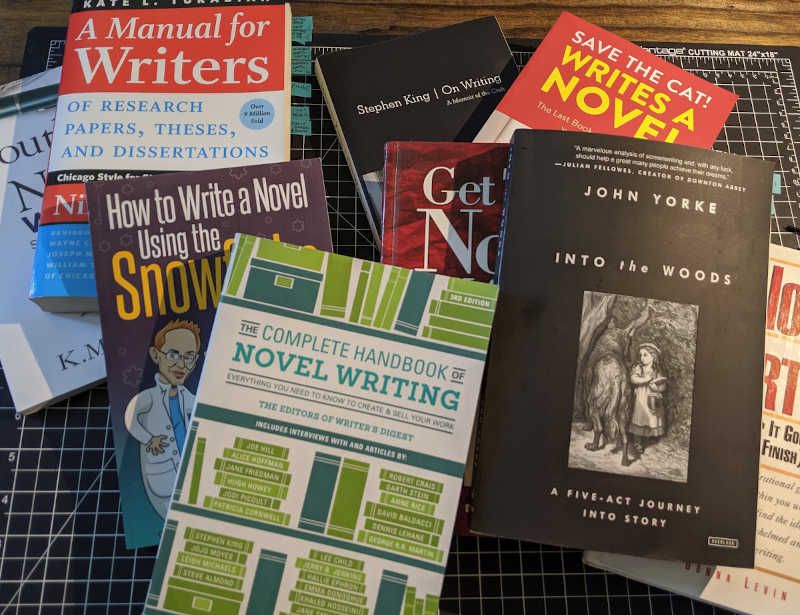 This is the problem: As a completist perfectionist, I allowed myself to wallow in analysis. I successfully avoided restarting my writing project by over-analyzing the problems with the project itself. Sure, in a way, I was still working on the project, but, at some point, I should have gotten off my ass and actually tackled the writing itself.

Instead, I found another enabler for delay: a redirect! I shoved that writing aside and started an entirely different project motivated by the desire not to restart the previous. That project: build a desk. A perfect writing environment would surely help me with my writing, right? Right?

The Desk: a secondary project

I've needed a real desk for forever. We live in a home that is 160 years old. It's beautiful and filled with antiques, to include the desk I have been using for years. But I wasn't really using it; because, well, just take a look. 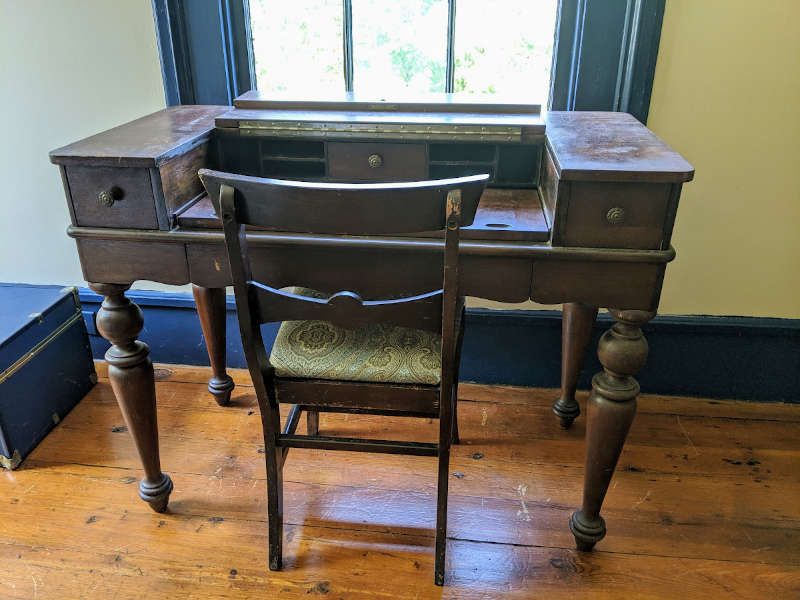 It's an antique writing desk. It's good for one thing: writing. More correctly, it's great for writing with pen and paper, namely letters and such. And it is pretty. But it is not designed for today's work requirements. There's simply no space. The desk does have a surface that you can pull out that extends the depth of the desk, but it's wobbly and only solves the problem in that one dimension. Today we modern workers have computers, various gadgets, and pens and paper. I need both expanded depth and breadth. Additionally, I despise it when drawers and such squeeze out all the legroom. It's simply too cramped. I need a modern desk.

To the drawing board!—or in this case, my journal. I Bullet Journal nearly every day and it has become the destination for all of my thoughts and schemes. I started scheming. 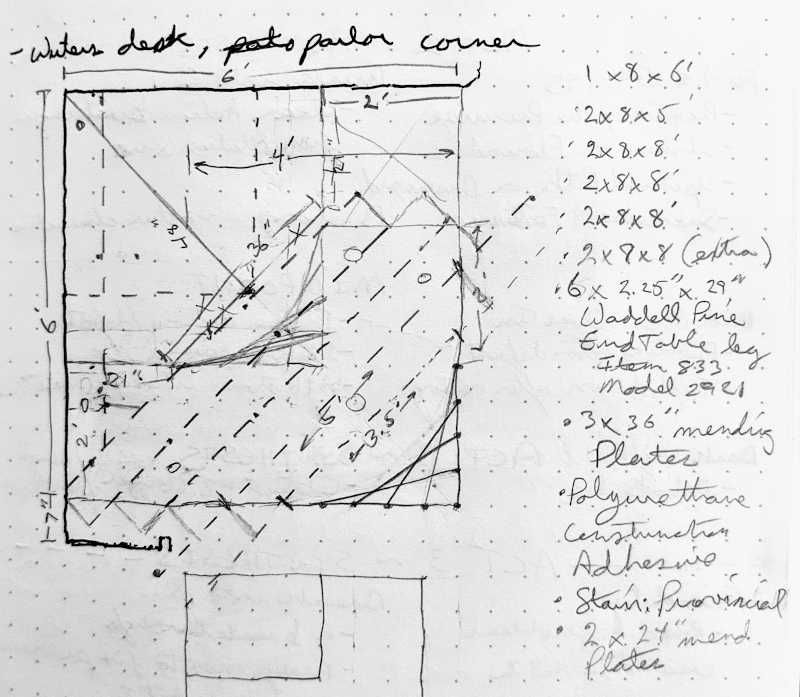 But what about that pesky novel? Well, all my problems associated to my novel conveniently received a stay of execution. I became too busy to write; I'm building a desk after all! That new desk has been on my to-do list anyway, right? I'm not procrastinating if I am productive in some other capacity, right? ( . . . rationalize, rationalize . . . )

No, not right. It's a redirect. I should have been writing, but instead I put off the more challenging and stalled task (writing) and moved down the to-do list to something completely different and far easier and far quicker to accomplish.

The next phase of my redirection included purchasing all those materials. The plan was "close enough" (I'm a perfectionist, not obsessive-compulsive) and I purchased pretty close to my scribbled plans. The mending plates are different, etc. etc.

I finished shopping, and then cut and sanded everything, assembled, and then test drove the sucker. 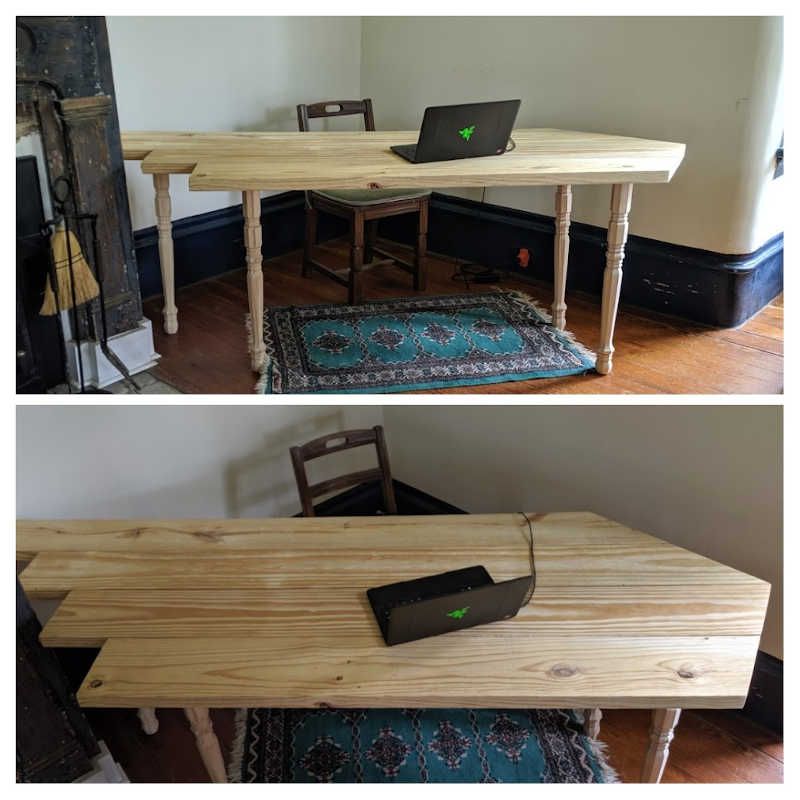 I liked the unorthodox shape, but I still had to trim it a bit. I wanted to remove some of the corners and I needed more room to scoot by the end nearest that wall to the right. 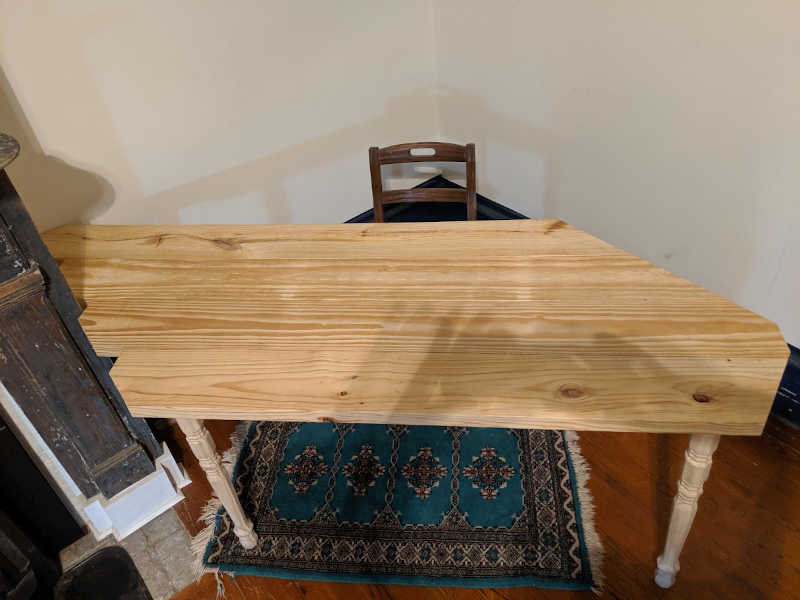 Wow. I was a bit surprised at how much space was removed with that bit of trimming, but the desk fits so much more naturally into that 6-foot by 6-foot corner of the room.

The next step was to dismantle everything; stain the wood; spray-paint the chrome brackets flat-black; let it dry for a day or so; and then, reassemble the desk. Here's a picture of the brackets used to hold everything together. I thought I would have to use constructive adhesive as well, and maybe even 1x4's, but twelve 6-inch mending plates were sufficient. 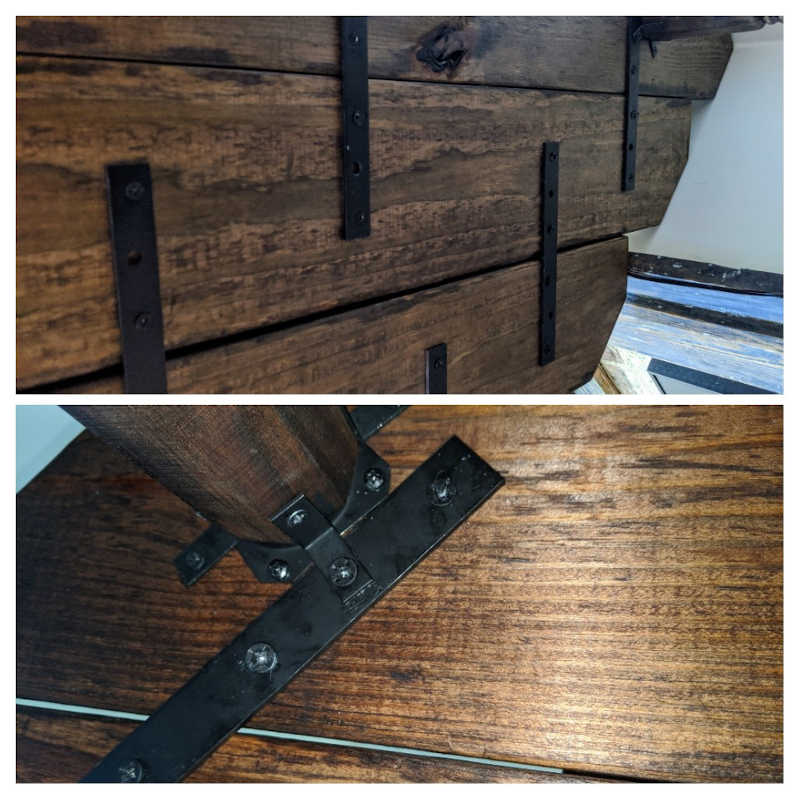 I set everything up; then added a power strip, inbox-thing, writing-paper-holder-thing, a pen/pencil holder, a valet box, a red Swingline stapler, a lamp, and a 'cutting-mat-as-desk-mat' (because a leather desk mat is just so darn expensive. 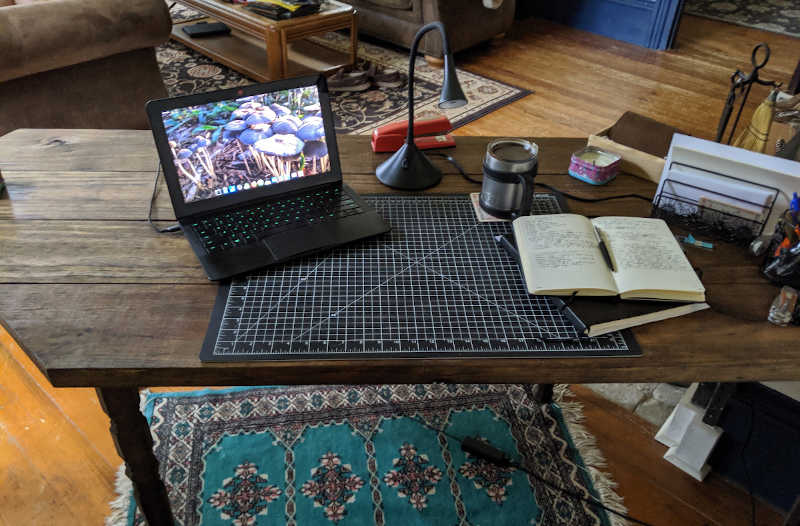 Novel pages written in this time?—ZERO—though I did take copious notes, wrote an outline of sorts, and worked on premise, theme, summary, synopsis, etc.—anything but actually attack the prose. I successfully redirected energy towards over-analysis of my story problems and building a frickin' desk. But hey! I have a nice desk and a much better understanding how to solve my writing woes. Now, I just have to get back to writing. This blog post counts, right? Those hand-written letters I sent to a few people count, right? Writing a novel is hard. It seems that often it's not the actual writing that is the biggest challenge.

Time to get back to writing.

Those skinny legs really bugged me, so back to the hardware store I went and replaced them with with more substantial table legs. Lemme tell you, table legs are quite expensive for what they are. 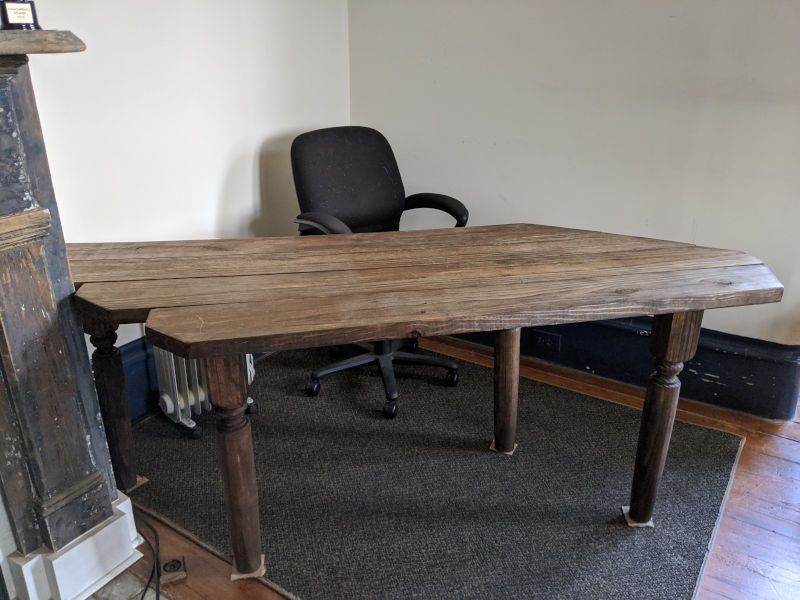