I think I've started this little soliloquy a dozen times now. I mean, what can one say that hasn't already been said? How does one sum up their feelings for their father in such a short message? It's a daunting task, but here goes . . .

I guess my message distills to this: I miss my dad.

That's it. Maybe that is enough. I don't know. I'm 52 years old, and for 52 years, my father was simply always there—his hand gently resting on my shoulder, even when I was a half-a-world away. I knew, no matter what, no matter how many stupid mistakes I've made, no matter how many bad decisions in my life, my father was there to support me. Both of my parents were always right there; right there beside me, beside all of us.

All of you know Mom and Dad as neat people, your friends, the Warners, neighbors, coworkers, etc. But what you may not know is that they are truly the greatest parents in the world.

I know; I hear you already: "Todd, you're biased. You exaggerate." Sure. But it is also the truth. At this point, I think all of my friends roll their eyes when I talk about my folks. I have a common refrain: The greatest gift I have ever received was the parents who raised the three of us—Eric, Kristen, and me.

Mind you, when I was a kid, I hadn't quite realized I had won the parental lottery—I thought everyone's parents were just like ours. I think it took me leaving home and venturing out on my own to notice that guiding hand on my shoulder. Adulthood gives you a broader perspective. Once recognized, I never took that gift for granted.

On January 21st, we lost one-half of that terrific team. And so today, we honor my father, and I thank everyone for being here.

I miss those hot summer days when Dad would visit a neighbor on his tractor and take one of us kids with him. We'd sit on the tractor's axle housing. The tractor engine and Dad on his spring-loaded open-air seat were to your right. To your left was the giant tire, taller than we were, a panel of steel the only thing between you and those big knobby tires. We sat on that axle, gripping that fender, our legs dangling mid-air as the ground whipping by beneath us. Nothing kept us from bouncing off that axle but a desperate grip, abject terror, and a lot of luck. Now, I shudder just thinking about it. How did we not get hurt? Oh, yeah. It was the '70s.

Speaking of the '70s, am I the only one, when reminiscing, who envisions everything from that era in those same washed-out colors as in all those photographs? I cling to the memory of Dad during my youth with his '70s sideburns and big swoopy hair. I remember a brown suit and a big tie. In my mind's eye, I'm wearing Sears Toughskins denim pants and a matching jacket top.

Dad loved the outdoors and the natural world. This passion imprinted on all three of his kids. That's part of his legacy.

I miss taking all those hikes in Raccoon Creek State Park. We'd appear to get lost, but never fear; Dad always knew the way. He also knew every back road on our side of Pittsburgh and then some. True fact.

When we were kids, Dad bought a 17-ft aluminum canoe at Sears. We paddled rivers and lakes all over the region. Dad would take us out, find a quiet spot, and then leap into the water, coaxing us kids to join him. Dad was an excellent swimmer and grew up on a lake. So naturally, when the water was calm enough, in the water Dad would go—whether it be the Raccoon Lake or when we paddled miles and miles of the Little Beaver River.

We did quite a bit of canoeing. In fact, I just recently told Mom how much it means to me that I still have that same canoe. My wife and I have a little farm, complete with a bass pond. I take Dad's canoe out onto the water quite often and fish. I think about him every time. I just wish he had been well enough these last few years for me to take him canoeing again.

I mentioned his affinity for swimming. When we were small, Dad would get in the water and squat down so that one of us could climb onto his back and hitch a ride. He would swim and swim, one of us kids riding those back muscles as they pulled so powerfully through the water. Dad would swim far out into the lake or ocean until the water was so deep it unnerved me. Then he'd stop, tread water and talk to me softly until I calmed down, and only then would he swim back. Dad was my superman. He was so strong.

We also fished a bunch, and Dad would take me hunting. A lot of my hunting experience involved a skinny boy's attempt at staying warm. Though I wouldn't trade those memories for anything. We fished and hunted more for the experience of participating in nature than for the gettin'. You foragers, fishermen, and hunters know what I am talking about.

I miss my dad's mind.

Dad devoured information, news, random facts, . . . everything. He could participate in a discussion at some level on most any subject. But if caught off guard by a topic, you could bet you'd receive email snippets as he documented his research into the subject. He was just so very curious. About everything.

That curiosity extended to the physical as well. To the doing. The mind and body. Dad engaged as a participant in the natural world and the place where we lived. Growing up in Hookstown, we lived on a small rural plot. Dad built a barn himself (Eric helped), put up fencing, and filled them with a couple of horses and chickens. Dad bought this ancient tractor (the one I mentioned earlier) and rebuilt the engine. I remember it took him forever. Dad liked to tinker. To puzzle. To do. To figure things out.

Dad's career spanned the world of computing, but his degree was in chemistry. He had a little chemistry lab in the basement. So very neat. But his greatest love was photography. True to form, Dad dove deep into photography, and thus, he had the most amazing darkroom. Really, it was just the laundry room with a red light, drying lines, dunk tanks, and other equipment, but to me, it was a room filled with magic. I can still smell those chemicals. Magic!

These moments in time are precious to me. But what I miss most are the unspoken moments. The hugs. All those times over the years when I've gone to him for advice, airing out my misdeeds and problems, where he would just listen and offer gentle suggestion.

He could be quiet at times, but then sometimes gruff and difficult to talk to, crotchety even, but those who knew him knew he had the warmest heart. A giving heart. They knew Dad as a man who would bend over backward to help anyone. He was never someone to stand on the sidelines wringing his hands. It's that generosity of spirit, time, and effort that both he and my mother share that I love so much and hope I emulate at least a little bit.

Because he cared so deeply, Dad could get intensely worked up about injustice, cruelty, and all the dark things in our world. But at the same time, and maybe it was a coping mechanism, he had this unique ability to step back, breathe, and take things in stride.

That stoicism carried over to his final days. His mind was sharp until the end, and I got some time to talk to him about his fears and regrets. He told me that he was glad to have so many more years than expected, but at the same time, he was shocked that his time had come so soon. Yes, this depressed him at times, but I think he had finally settled into an acceptance of sorts towards the end. A truce with the Fates at the very least. And for that, I am so very grateful. He and all of us who were with him in those last days were blessed to have had time to wrestle with the inevitable of what was to come.

Dad and I had one rather particularly poignant conversation. I held his hand, and we talked about this final journey. How, in the end, we were all on the same journey, but a journey where he was taking the lead—where he was goin' on ahead. How, in the grand scheme of things, none of us were far behind. Fortunately, the whole family was present for that last week. We pledged to remain by his side and hold his hand until forced to say our goodbyes as he passed on through that doorway on his own. And we were. And we did. And he did.

I realize, of course, that as the years go by, the sting of his passing will fade. His imprint, though, will remain. Those ripples in the universe we leave behind in our wake are what truly matter. And we all hope we leave the world marginally better than when we entered it. Dad certainly did that—for me, Eric, Kristen, and Mom especially. But also for all those who he touched.

In closing, I want to share a surprising moment in my own life from maybe a year or so ago. This event stopped me in my tracks and made me better appreciate the little ways my Dad left his mark on me. This moment involved one of those random social media queries. Someone asked, with no context, "So, if you had to name one, what's your favorite scent?" I read those words and BOOM! I was transported back in time. In a rush, I re-experienced my father, on a hot summer day, walking into the house after hours of work outside. Dirty. Exhausted. Glowing. And filling the air when that door opened, allowing him to pass, was the bold scent of grass, sweat, and tractor.

I wish I could bottle that up and carry it with me wherever I go. Fortunately, our childhood memories often carry strongly forward. If I concentrate and the moment is right, I can close my eyes and re-experience the essence of that moment—grass, sweat, tractor. Keeping my eyes closed, and if the world is quiet enough, I can still feel that hand on my shoulder guiding me towards a brighter and more positive future. 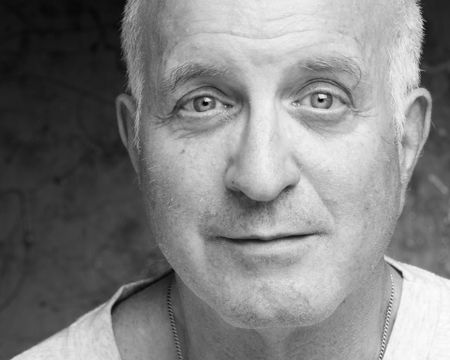