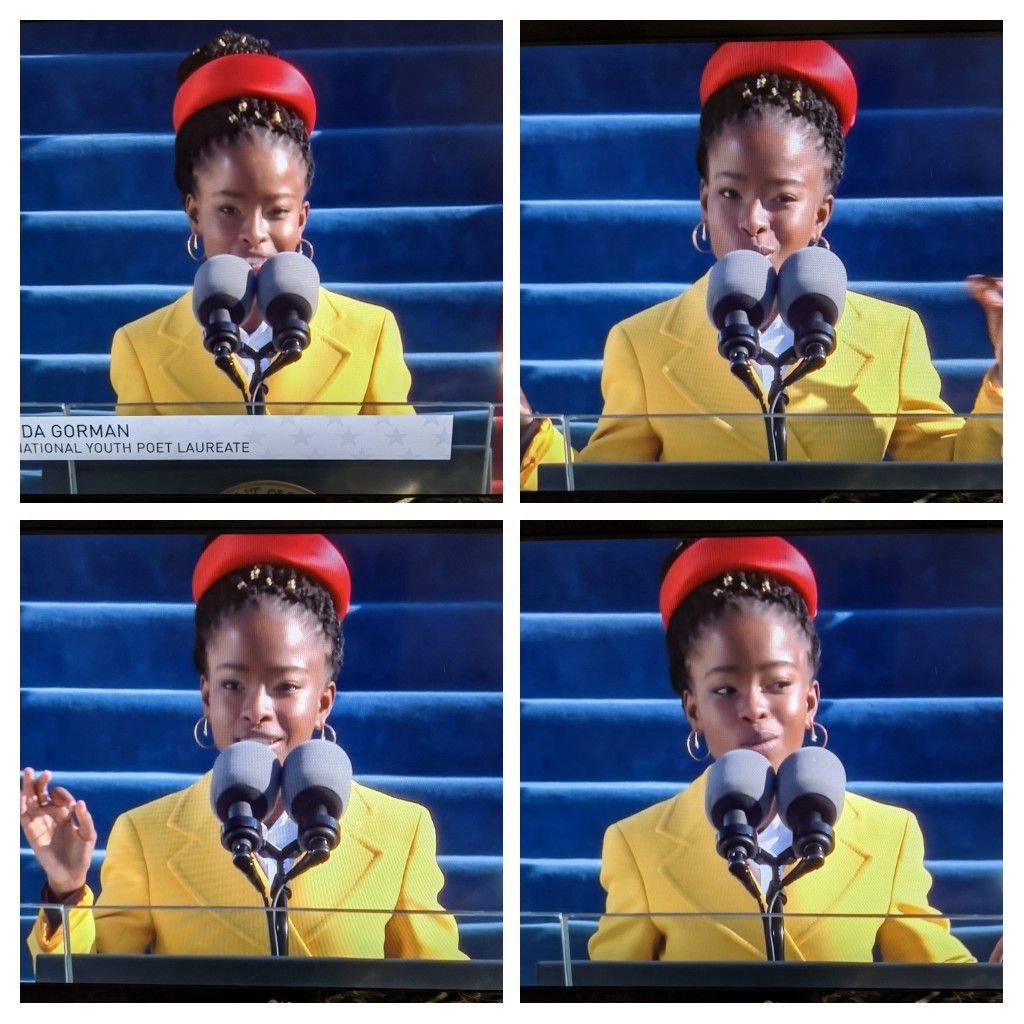 Who am I kidding? The year 2020 was a particularly long one. A very full year. A year marked with, in summary, Racism and Pandemic and Politics. Fun times!

Warning: this post may be a bit depressing, but it will pick up towards the end. I promise!

#BlackLivesMatter arose out of some highly visible examples of police brutality, giving some needed attention to our nation's struggles with systemic racism, systemic racism, in this instance, dramatically demonstrated by our police forces and judicial system. Massive protests ensued and will surely ramp back up again unless substantive action is taken.

In the midst of all that, a pandemic hit. Something we just couldn't believe could happen in our lifetimes . . . until it did. The US—being the US—was incredibly slow to act, slowed down by a severe lack of leadership in the top positions of our country. Additionally, progress was substantially slowed by our irresponsible—or selfish or just plain stupid—citizenry, who will follow internet conspiracies before they will listen to our most educated: our scientists. The result: 400,000 people dead and untold thousands who have "recovered" but are burdened with chronic health issues. All because wearing a mask and respecting your neighbors' health is just too much to ask. People!

Two members of my wife's family got sick. They recovered just fine. Two members of my sister-in-law's family got sick. One died, and the other is facing disability for the remainder of her life. To say we have no patience for folks who fight the reality of this pandemic would be an understatement. Before, they were just selfish and stupid. Now, they are merely bad people.

When we look back at 2020 in the history books, it will be the politics that loom the most prominent. It's hard to beat a staged coup for dramatic effect.

In 2020, the few Republicans still remaining in the party exited, leaving only the crazies behind: the crazies, the authoritarians, the kleptocrats, the extremely corrupt; and yes, of course, the racists and loons. The United States never saw fascism this extreme before, except perhaps in the years of Hoover and McCarthyism. As they are called (Republicans In Name Only), these RINOs preyed on the fearful, the weak minded, and became champions for the morally bankrupt. There was one really odd demographic involved—the evangelicals. A large percentage of evangelicals embraced a leader who, ironically, glorified in everything evangelicals purported to be against. And yet, there they were. Boggle!

The outcome of this played out largely as expected. The discussion began back in 2019: would the GOP, as it was now configured, attempt to illegally disrupt the next presidential election? Turns out the answer to that was a resounding, "Yes!"

For the very first time in our nation's history, there was an attempt at a coup. Now, of course, we've had a civil war in the past, but that was a different animal—states seceded. And we've had assassinations (Lincoln, JFK), but those were more punitive. And we've had one coup d'etat at the state level, here in my beloved North Carolina no less. Believe it or not, it was successfully executed and very sad: read more here and here. But, on January 6, we were all witness to the final (and luckily, failed) action of our nation's very first coup attempt at the federal level. Unprecedented.

Preparations actually began a number of months prior. A direct attack on the efficiency of the US Postal System was the first order of business. A new head postmaster was appointed and was tasked with disrupting the reliability of on-time delivery. A poorly functioning postal service would disrupt the flow of mail-in ballots, which traditionally skewed very heavily in favor of the opposition.

To ensure enough people would back these seditious acts, a drumbeat of misinformation was being fed to the GOP faithful. These folks ate it up because they wanted to believe it. White nationalists were rallied to the cause as well.

The disinformation campaigned worked exceptionally well, as was the effort to mobilize the White Nationalists and Evangelicals and really any group noted for their advocacy for suppressing civil rights for all Americans.

The hope was that the vote would skew in favor of the incumbent administration, and then no further action would need to be taken. But the disruption to the US Postal System was only moderately successful. It failed to adequately interfere with the flow of ballots, which was the critical bit. Boom! Biden won the presidency.

Next, attempts were made by the losing side to just scribble out the results and fill in different outcomes. Well, that didn't work.

As a final act, more extreme measures were taken, and the Capital was attacked. The objective was to either (a) forcibly remove people from power or (b) intimidate them enough to change the results of the electoral college vote. It was never going to work, but it could have been a bloodbath with all kinds of negative ramifications. Still, seven people died.

The coup failed spectacularly, and lots of people are going to go to jail.[1] In the olden days, we'd have just hanged the lot of them and been done with it. We don't do that anymore, and I am glad we don't. Unfortunately, the ones most at fault will probably walk. We rarely punish politicians in any meaningful way in this country.

Let's also not forget the millions who supported all this from the beginning. They will shrug their shoulders and move on as if nothing happened—no big whoop.

Quite the year, indeed.

We learned some things!

Politically, we now know that our system, which relies on a balance of powers, is not quite adequate up to the task of controlling bad actors. Too much power resides in one role in particular. That needs to be addressed. These past four years were headed by a stumbling, incompetent person, but he still caused a lot of damage. We, as a nation, now know we need to work towards making the system more robust for when the time comes a more talented evil-doer rises to power. This was just a test, folks!

The pandemic was a baptism under fire where we were forced to scramble to figure out how to enable a nation to work from home, learn from home, and for those who had to continue in their hands-on roles, learn to work safer and with great care. Can you imagine if this pandemic arrived in the years before the internet? We had it far easier than our grandparents and great-grandparents. We learned to adapt and adapt fast. The pandemic also highlighted the rural:urban divide where large swathes of our country didn't (and still don't) have access to the internet in any meaningful way. Perhaps that will be addressed now that we have better leadership at the top. I'm hopeful, if not optimistic.

We also learned how powerful all-hands-on-deck can be in the medical industry. Several novel vaccines were produced in record time—a testament to scientists everywhere for tackling this problem and coming up with solutions, despite hostility towards science from politicians and even the public. Kudos.

Black Lives Matter will continue. This the United State's thorniest and longest-running problem. But the problem is illuminated like never before. Activists and even the public are energized to solve these kinds of issues. I am hopeful AND optimistic.

Since 2020 was a lot, I was really looking forward to the new year.

I think it wise to just lump January 2021 in with 2020. January was pretty much akin to a really bad hangover achieved after three years of heavy drinking that we then quickly followed up with a year of binging until we passed out. So, for me—for us—2020 didn't end on December 31, it ended on January 31. The dust settled, and fascism was shoved back into the corner: Still loud. Still ugly. But not in charge anymore.

Everything is looking up! On all fronts!

A new, more progressive administration is now in power, which means racial issues will not be swept under the rug. At least not as much as they had been. Changes are coming. Real progress can be made on more critical issues now, like the economy and the environment, education and healthcare, and re-engaging with the world beyond our borders. All the things completely abandoned previously. We can pick up from where we left off.

And now, our youth, who are ultimately the change-makers, are rising in prominence and energized. Their poster child for the moment is the super-talented poet, Amanda Gorman. Her poem read at the presidential inauguration was POWERFUL and hopeful and timely. We, as a nation, needed to hear it right then and there. Her recitation made her an overnight superstar. She is fresh-faced, youthful, brilliant, and beautiful. And a poet. A perfect combination. Heck, she has even been invited to speak at the Superbowl. The Superbowl! You know the world is changing when a poet is selected to open the Superbowl. I chose her as my symbol of hopeful change for this article.

The New Year for Me Personally

I just spoke at length about Us with a capital U. Or perhaps US with a capital U and S. I never really intended to discuss all that when I started writing this post, but I guess it was unavoidable.

As for Monica and myself, we have been fortunate. We have remained mostly healthy, and we live in one of the most robust economies in our nation, Raleigh-Durham, North Carolina. The real estate industry hasn't slowed down here in the slightest. And yet, magically, it remains an affordable place to live for now. That will likely change if this economy keeps booming. But the result has been that Monica and I have not had to worry much financially, unlike many other people we know.

2020 has had its ups and downs for us. We have looked out upon our beloved country with worry like everyone else. The farm has had its struggles, but in many ways, this was the first year we have enjoyed fewer surprises and fewer tragedies.

The writing (for publication) has been on hold for a long time. I've just been spinning my wheels, so I needed to step back. All the writing I have done (and it has been substantial) has been for myself. Instead, I have focused on life and wife and the farm and just trying to be a better person and husband.

Our marriage prospered in 2020. The extended time with Monica has positively impacted our relationship. We have only grown stronger as a couple. That bond is sacred and is more important than all other things. So, we are indeed blessed.

Cheers to all of you. The last few years have been challenging, but this last one, in particular, has been a doozy. I hope all of you have avoided tragedy and continue to stay safe. I hope you have also at least attempted to remain positive in the face of so much negativity. And if you are still struggling, remember to reach out to those nearest and dearest to you. Never suffer in silence. Chances are that many of those around you are struggling as well.

Finally, remember that things will get better! They are better. The nation has turned a corner, as has the rest of the world. Here's to a blessed and better 2021!