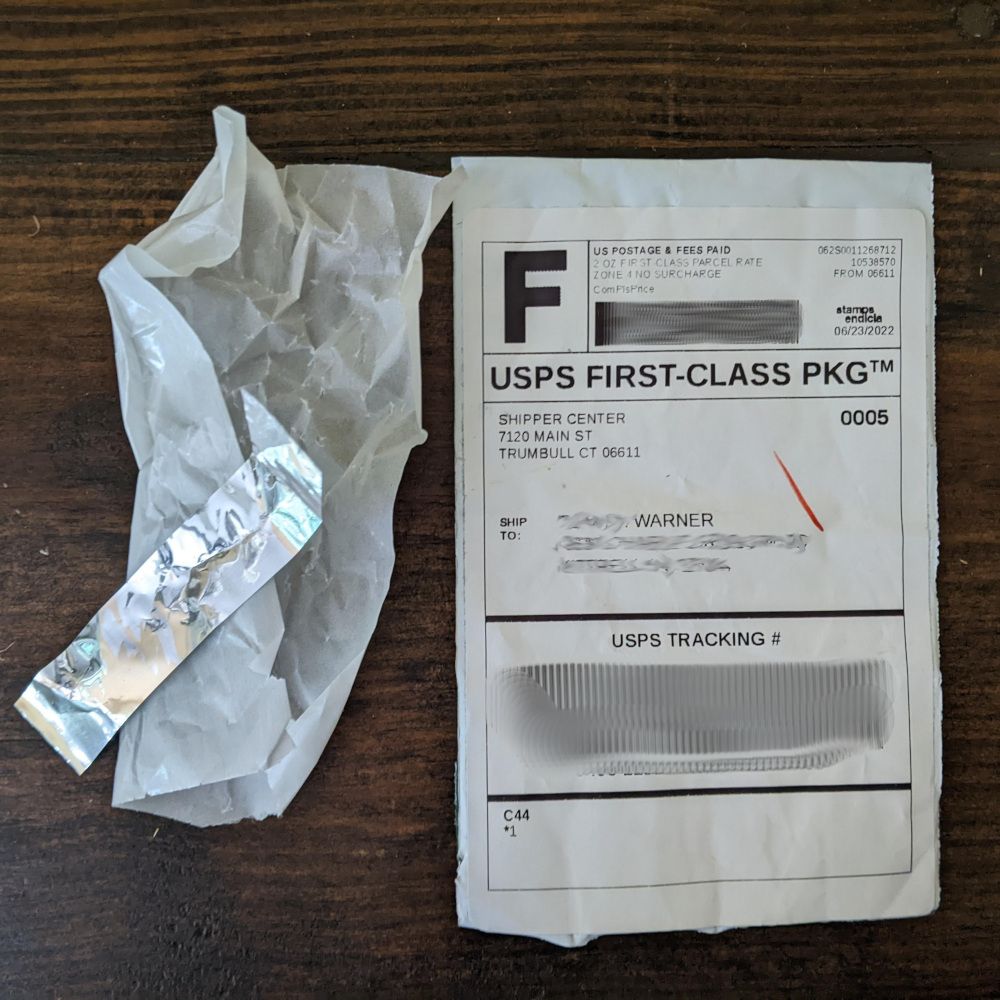 On Thursday, June 23rd, 2022, we received this small package in the mail. Do you notice that bit of paper (a candy wrapper?) and a bit of foil sitting next to the package/envelope? That's what some mysterious stranger shipped to us.

Believe it or not, the first thing I did was wash my hands. I had visions of some long-forgotten enemy or spurned lover from my past sending me an anthrax-laden envelope. Of course, that's a bit far-fetched, but yeah, that was the first thing that entered my mind.

That was yesterday. Today (June 24th), while running errands, I decided to visit a random post office (my "secret admirer" shipped this via USPS) and ask them if they could track it back to the origins. I went to one post office and showed it to the manager there. She took it to the back for some time but then came back with, "You have to go to the Kittrell post office. That's where it landed before delivery."

I wouldn't have thought that investigating a USPS tracking number required special hometown tools, but whatever. So, off to my hometown post office I went. I stood in line forever (probably only maybe 5 minutes, but you know how these lines feel) only to have them glance at the label and point at the listed return address. "That's where it came from. —NEXT!"

Not helpful. But I understand that we are all working with incomplete information. The post office could only trace it back to the address listed on the label: a random shipping facility in Connecticut.

Well, we all love to curse the big tech companies for how dependent we all are on them, but kudos to Google Maps: I looked up the address. Lo' and behold! It leads to an Amazon shipping hub. So, my next step was to contact Amazon support.

I dreaded contacting support because Amazon is a giant behemoth, and we all know how terrible it is to interact with such bureaucracies.

Shockingly, and with much credit to them, contacting Amazon support was a generally good experience. Good because I didn't have to wait on web-chat hold forever. And good because it was kind of hysterical, never mind the result. Keep reading . . .

Todd logs in and rings up Amazon support via web chat: 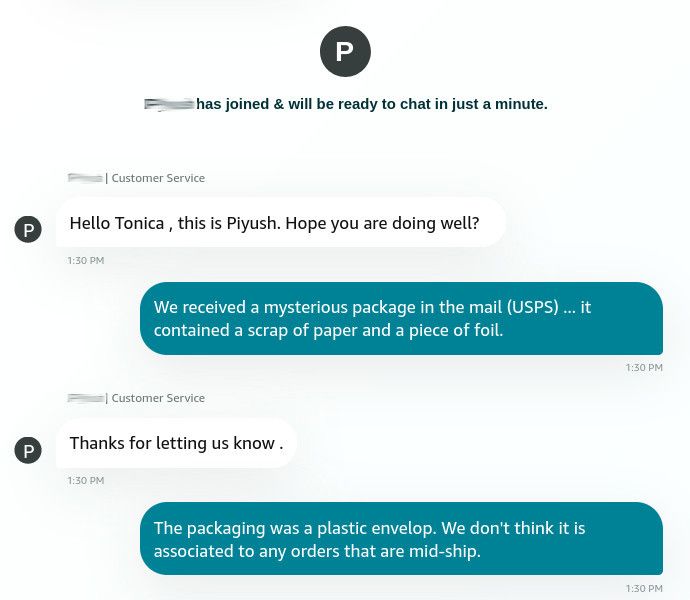 The "Thanks for letting us know" response was odd, but I had to give her the benefit of the doubt for now. I suspected that English was probably not her first language. And that was fine, of course. As long as we could get the message across. 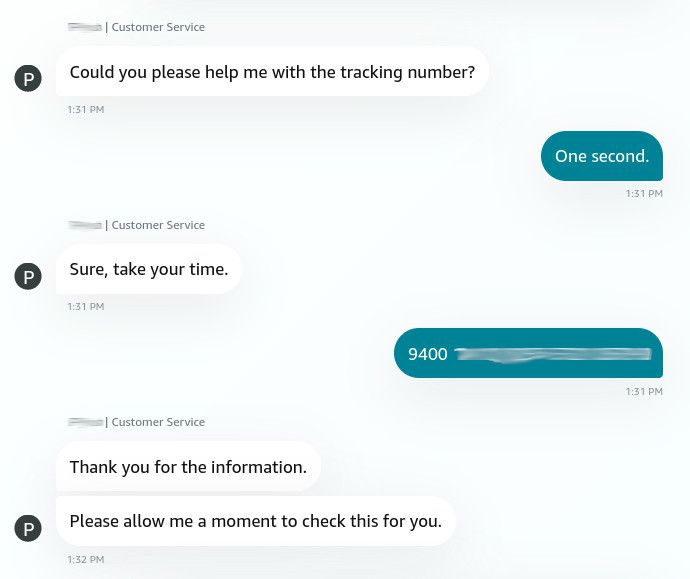 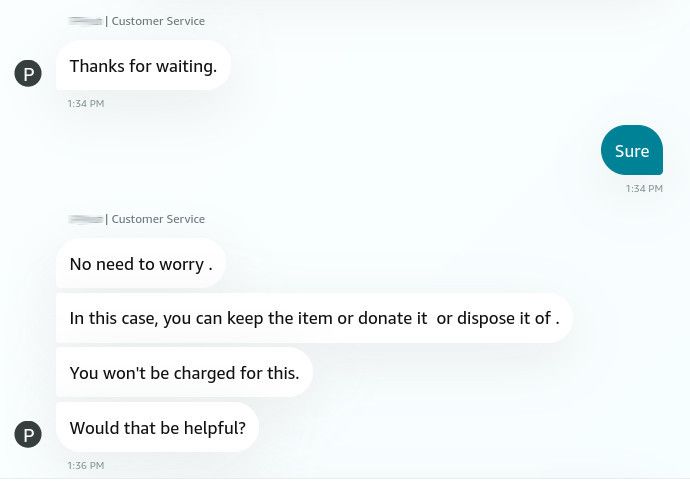 I.e., she checked some things and then blithely hit me with a "you can keep or donate it if you like." Er . . . Who would want a scrap of paper and a bit of foil? I now started to suspect I was speaking to a bot. 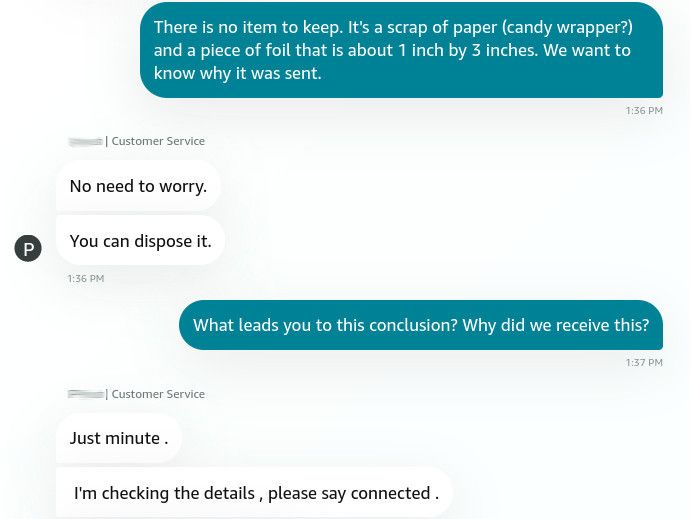 So I, as you could see, had to re-explain things because I didn't think she really grasped what was going on here. But her response, "Well, just toss it!" kinda leads me to suspect this kind of thing happens far more often than I realized, and this is their standard punt. I mean, the real mystery is still not solved: why did this happen?

I admit I got a bit snarky there. But the customer service rep skillfully erased any real annoyance with her response in the following tidbit of dialogue. It left me laughing with incredulity anyway . . . 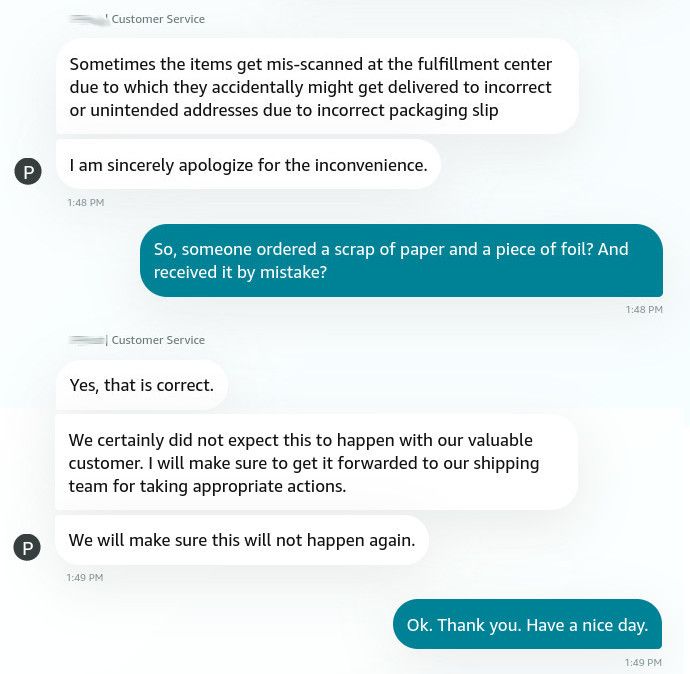 Hysterical. But sometimes, you just have to let things go. I did my due diligence, and the good folks at Amazon at least attempted to respond with something. Part of me still wonders if I was talking to a bot the whole time.

I got off the computer and tossed the envelope, paper, and foil into the trash. A total waste of time and more than a bit ridiculous, but it made for a humorous snippet of anecdotal memoir. (Don't we all need a bit of humor in our lives right now.)