There is an oft-repeated—maybe apocryphal—statistic that roughly 80% of the US population lists "write a novel" as a bucket list item. Today, I am happy to announce that I can scratch that item off my personal bucket list—at least partially; more on that in a bit. Today, I crossed the 50,000 word level and won NaNoWriMo2019

What the heck is NaNoWriMo?

Twenty years ago or so, a bunch of friends got together and, on a lark, challenged themselves to write a novel in just one month. But since "novel" is a rather subjective target, they realized they needed some metric that was more quantitatively comparable. They settled on 50,000 words as their metric of success. 50,000 words in a month.

They enjoyed this tiny, private, yet friendly, competition so much that they expanded it the next year by inviting more friends. And then did the same the next year. And the next year. They called this competition "NaNoWriMo" which is a somewhat-ridiculous acronym for "National Novel Writing Month" which is held every year in November. Zoom ahead to 2019, and it has been estimated that over half a million people from around the world are competing in this massive group marathon this month with the objective to bang out 50,000 words.

I use the term compete loosely here. There is no prize. There is no shower of money at the end. No trophy. The only reward is a personal pride of accomplishment. Anyone can join in this madness and there is no panel of judges examining the conditions of your entry to make sure you didn't fudge your numbers. It's executed purely on the honor system. But since there is no prize waiting for you at the end, instead of competitors, a supportive community develops. A community of people striving to reach the same goal and who cheer each other on in the process. And—and this is important—it's also a community of people who will cheer you on regardless if you truly complete the challenge: 50 words written? Go you! 500 words? Even better; Go you! 5000? 49,999? Good job! Go you!

Here are some examples:

Since I have semi-retired from corporate life I felt this was the time, the time I finally can spend time writing a novel. I had a few ideas, but one percolated to the top some time ago. Encouraged by friends and fellow writers, I finally put pen to paper and had a go at it.

I had a great beginning: a middle-aged man living in the rural south (ahem) and a few unexplained bodies. Rockin'! Awesome!

I slammed into the dreaded murky middle and ran out of steam and the narrative was going nowhere. It was a mess.

So I took a breather and started reading about the craft of writing. There are no cookie-cutter "this is how it shalt be done" rules for writing a novel, but there are guidelines and, maybe more importantly, techniques that can boost your chances of succeeding in telling a coherent and engaging story. I have written many a story in the past. Heck, half my previous job was devoted to weaving stories, though admittedly, about products and services for a tech company. I never created a story of this breadth and depth.

The original plan was to knock out a first draft of a novel by maybe September and then to use NaNoWriMo as a platform to kick off another novel.

October came around and I had a decent beginning, the shitty beginnings of a middle, and . . . no real ending even imagined.

My Great American Novel ambitions in disarry, my new focus became to prepare to dive back into the novel during NaNoWriMo. To use NaNoWriMo as a motivating force to make real progress on the existing idea.

So, I did what many great novelists do: I outlined. Now, there is a great debate as for the best way to write. The pantsers of the world just write, from the seat of their pants, and the novel takes shape as they go. That was my first attempt way back in the beginning and I got thoroughly stuck. Now, the pantsers of the world would say, "Just write and it will eventually come to you." And maybe that would have occurred. I would have had a great big pile of crap, but a pile of crap to work with and revise into a story. The plotters, on the other hand, come at it with a plan in mind. They plot—or outline—well ahead of actually writing the first draft. They spend copious amounts of time planning the novel, often scene by scene.

The debate, if you can even really call that, is that pantsers think an outline is too confining, and plotters think just winging it leads to a mess that is more work than it is worth to then have to clean up afterwards.

Now, if you remember, I had already written a bunch of the beginning and a little beyond that. What I did for NaNoWriMo was restart somewhere in the middle of that and simply started writing scene by scene. When I hit unplanned bits, I had enough scaffolding of planned bits that I could fill in the rest. The writing came pretty easy. At least for about 30,000 of the 50,000 words.

After about 30,000 words things bogged down. Somewhere along the way the characters veered off course. They went "off-script" if you will. I was now in uncharted (and unoutlined) territory. I knew where they needed to end up, but I had no idea how to get them there. So for the next 20,000 words I spent all that time with three different PoVs (Points of Views) with the eventual plan that they will converge once again.

So, as I coasted over the 50,000 word mark (50,015 to be precise), I created something that I am actually really darn proud of. I now have a pretty great beginning, a solid setup and damn fantastic first inciting incident, a fascinating journey into the woods, characters that struggle, question their choices and wrestle with their demons, and then I also have a small mountain of words that I know will need real work that round out the trek towards the middle point of this novel. 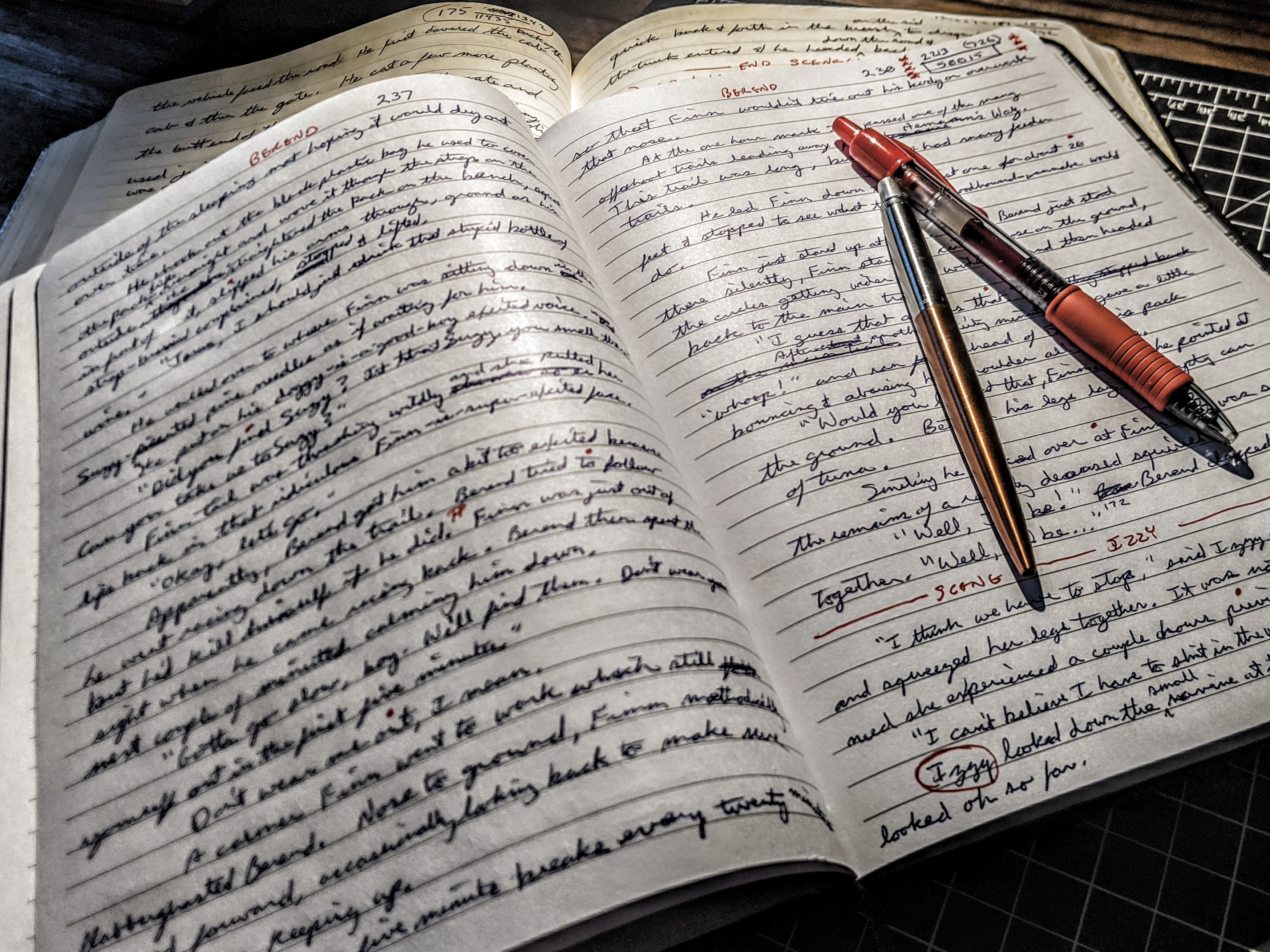 Regardless, I am over 50,000 words deeper into a draft zero.

And did I mention? I wrote this all by hand: pen and paper.

I have to keep going. I am going to take a small break, then I have about another 40 to 50 thousand words to write before I consider this first draft (or draft zero) finished.

The next step is daunting. I will start back at the beginning and type it all into the computer, revising as I go. After that is complete, I will consider revision draft one done.

And then revise. Revise again. Beta readers. Revise again. And then decide if I want to publish this at all. Personally, I think the story is worthy of publishing. You never know. The writing may be as well.

Good luck to all of you in the #WritingCommunity

I have a new appreciation for the craft of writing. This experience has opened up a whole new world to me and I am damn glad I finally showed up to explore it. Without #NaNoWriMo I may never have had the motivation to get off my ass and really push to see this through.

Here are some of the books I read that really helped me think more deeply about how I approached my writing.

Brody, Jessica. Save the Cat! Writes a Novel: The Last Book on Novel Writing You'll Ever Need. Ten Speed Press, 2018.

Ingermanson, Randy. How to Write a Novel Using the Snowflake Method. Ingermanson Communications, 2014.

Yorke, John. Into the Woods: A Five-Act Journey into Story. The Overlook Press, 2015.

It should be noted that this article is about 1900 words. So there's that.