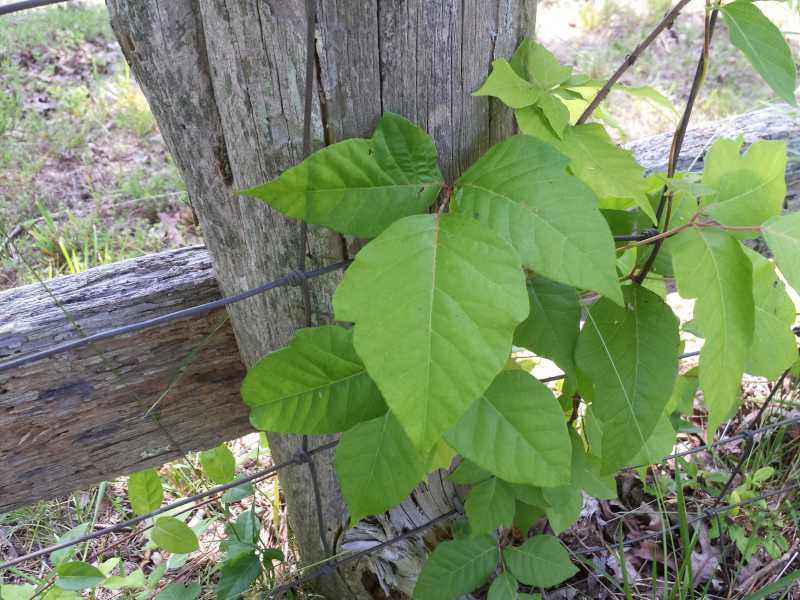 I live in the South. The North Carolina Piedmont to be more precise. And in the South, one particular vine—other than Kudzu—predominates: Poison Ivy. And boy does it affect me. Poison Oak and Sumac also exist, but I don't run into them as often.

Poison Ivy and its siblings exude an oil called urushiol. This oil is an irritant that will affect most people upon contact. Those sensitive to the substance will develop a skin rash called urushiol-induced contact dermatitis. I am one of those chosen many.

Note, most young children are not sensitive to the oil, for whatever reason. Sensitivity is developed by most people in their early to late teens. For some, deep into adulthood. I was in my 30s when I developed a sensitivity to the allergen.

The plant is pretty easy to identify, but here's a nice quiz to help you get a bit more comfortable picking out those three leaves: Poison Ivy Quiz

Note that a Poison Ivy vine is "hairy." If you find a vine that is not hairy, it's not Poison Ivy. Also... Many people don't realize it, but Poison Ivy blooms in the Spring! For us it blooms at the end of April / beginning of May.

Poison Ivy sucks. And it is everywhere where we live. Give me a ten-by-ten sunny to semi-shade plot of land in North Carolina that isn't manicured and I will find Poison Ivy. I grew up in Pennsylvania. There was plenty there, just not at this scale.

Okay, that's unfair. You can, but you can't completely. If you do anything outside, you will run into it. And by outside, I don't mean walking around in chemically sterilized locations: suburbia, baseball fields, etc. I mean places that are a bit more wild. You friend's farm or rural homestead. Unkempt parking lots. Parks (the ones with wildness to them). Etc.

This can help, but you still have to worry about these things:

Wash your hands often. Avoid scratching your eyes, nose, ears... All the stuff that commonly itches "just because."

Toss your clothing in the laundry. The actual tub. Not the laundry basket where someone then touches it again. Personally, I leave my sweaty work clothes hanging up outside to dry and wear them again the next day. I then make sure they are laundered whenever we wash everything else. This avoids having to dirty up many sets of clothing.

The challenge: North Carolina can hit 100+ degrees, especially in August. I personally balance Poison Ivy contact versus heat stroke—i.e., I often end up wearing shorts and a t-shirt regardless.

Gloves can help, but remember the scratching rules mentioned above. Gloves can also give you a false sense of security. Additionally, they too need to be cleaned. Depending on how long I will be outside pulling weeds or whatever, I will often go gloveless. If I need to work for a long time between washing my hands—gloves. If a short time—gloveless. If I am lazy—gloveless. I am often lazy.

I can't emphasize this enough. Ol' Boy will get some on him at least once a year, but, just remember to wash your hands before you go to the bathroom. And if you think have you washed thoroughly, do it some more. Focus on between those fingers! See next section.

If you know you will likely be touching Poison Ivy....

Other Tips and Factoids

THE authoritative how-to video on the topic: How to never have a serious poison ivy rash again

...but it is manageable; even tolerable.

As I write this, my wife is visiting her doctor so she can reduce her misery via steroids. I work outside almost continuously so I always suffer a bit. It's part of the deal. But at this point, I generally avoid significant rashes. I usually have one bad reaction per year because I was either a) lazy about washing or b) I really dove headfirst into clearing brush or some such and I just couldn't get out of the field for hours. Find your own level of tolerance. I balance convenience with practicality when I am out there, but most of you don't have to be me.

Don't let Poison Ivy stop you from enjoying time spent outside. A bit of discomfort is a small price to pay when servicing the needs of your soul.