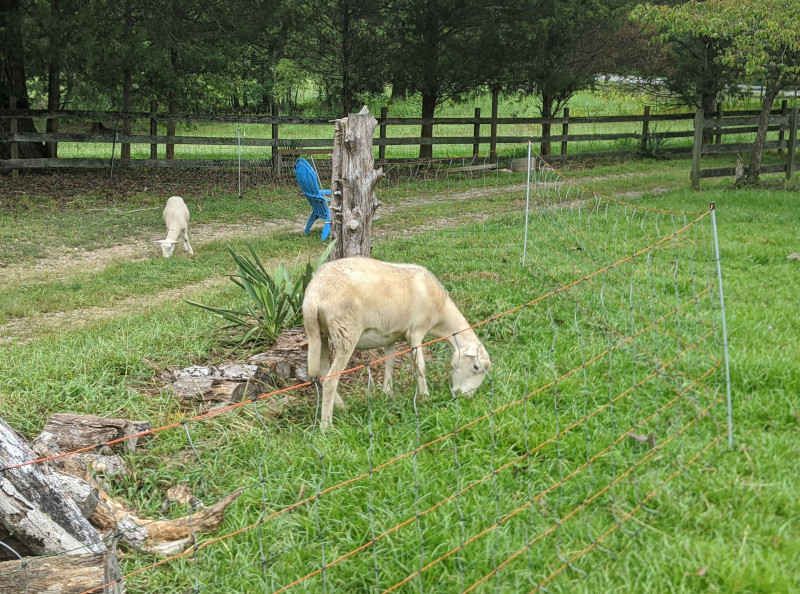 There's an old saying (also used in at least one version of the Bible for a bit of dialogue): The spirit is willing, but the body is weak. Never is this more apparent than when you ask your body to do something that was once trivial to accomplish, but now is, at a more "mature" age, in need of a bit more planning and care.

This morning, I was awakened by a thump and a chorus of "Maaaah!" You see, for the past three days, we've had the sheep mowing the lawn around the house. We put them in the south yard for two days, and then yesterday, we moved them to the north yard. This morning, the sheep decided to illustrate another rather famous idiom—The grass is always greener [. . .]—and as such, they busted through the fence and scattered themselves all over our front yard.

Pasturing the sheep in the yard about the house has its challenges. The fencing situation is odd, and we have to protect certain plants and things, and most of the time, the fencing is not electrified. To fence them in we use temporary fencing and link it to the permanent fencing surrounding us and to the corners of the house. We use a mallet—a two-pound mini-sledge—to pound fence posts into the ground because so much of the area was once covered in gravel. Where the fence crosses the driveway, I use a plastic lounge chair to prop up the fence. The chairs also serve to alert folks—like the UPS driver—that they can't just barrel down the driveway like they are used to.

Lemme tell you, when sheep escape, you have to drop everything and do what you can to ensure they don't destroy anything, run down towards the road, or somehow hurt themselves. If this happens and they catch you with your pants down, literally, you may find yourself running around the pasture chasing sheep, buck-ass naked. "Why, hello, neighbors!"

It began as a typical morning for the most part. Monica was already up and puttering around the house. I laid there with one eye open. I'm sure I was grumbling, in a debate about getting up or squeezing a few more minutes out of the night before I had to put my foot on the floor.

At that point, I received my first reminder that I am now fifty. My hips and back didn't entirely engage and I lurched downstairs rather than lept or sprang or traipsed or whatever young people do.

The second reminder came when I looked out the window. Though the nice eye-doctor lady forever congratulates me on my 20:20 vision (thank you, lasik of many years ago), it still takes me a few moments to focus. I looked out the window and saw fuzzy white shapes, but all in the wrong place. I squinted and cupped my eyes and finally properly assessed the situation: Most of one side of fencing was down. Quite a bit of fence, actually. And the sheep were already eating the japanese maple, elderberry, and more. Gotta move fast.

What probably happened was that since the temp fencing was strung close to the house, the prongs that embed in the ground don't seat properly. A prior generation laid down quite a bit of gravel throughout the yard surrounding the house. One of the sheep probably bumped the less-than-stable fence, and a big chunk fell in the process.

I turned to Monica, "OK, let's get some kibble [aka, sheep crack] and draw them back into the paddock. I'll hammer the posts back in."

We half-ran (lurched) towards the backdoor. The kibble portion of the plan required us to run to the feed shed, grab a bucket or two of kibble, come back, coax the sheep back in, and then fling the kibble into the feeders.

We were out the door, my mind mostly focusing on the sudden ache in my right hip and the cup of coffee I really wanted at the moment, when I realized that we had not refilled the kibble can in the shed (the great big trash can full of a mix of kibble and sunflower seeds). Crap!

Now we had to move faster. This involved grabbing a 50-pound bag of sheep feed and a 40-pound bag of sunflower seeds from the house and running them to the feed shed, mixing them together, and filling the giant kibble can. For the time being, excess bags of feed were sitting in our hallway. We recently bought in bulk and didn't have a mouse-free way of storing them.

Ugh. We raced back (lurched) into the house. I bent over and hefted sack of feed first on my knee and then clean-and-jerked it-ish to my right shoulder.

This action served as the third reminder that I was no longer thirty. My body protested the bend and squat, then the lift, the heft, and then up-and-over onto my shoulder. So ungraceful. So awkward.

I wrapped my arm around the bag and turned towards the door. That's when I reminded (is this my fifth reminder?) that I have a partially torn rotator cuff in my dominant right shoulder. I had previously promised not to do sudden explosive exercises with it anymore. Oops.

Monica grabbed the sunflower seeds, and we shuffled towards the shed. In the distance, the sheep were Maaah!ing with glee over whatever they were destroying in the front yard.

The giant kibble can still had half a bucket of kibble mix in it. I filled a bucket with the remainder and ran (less lurching now that I was warmed up) out of the shed and towards the sheep paddock. Monica stayed behind to dump the bags and mix them. Ready for next time.

No sooner did I enter the paddock when one sheep raised her head from some demolished ornamental and spotted the kibble bucket in my hands. At that moment, she knew. She knew that I carried that which she desired most in life: the sheep equivalent to donuts and chocolate laced with PCP, sprinkled with cocaine.

She raised her head and shouted, "Maaah!" and then galloped towards me. Sheep are no dummies. I mean, if one of my flockmates were excited by something, there would be no doubt that I needed to be excited about it as well. At that excited Maaah!, the remainder of the flock raised their heads, saw the bucket in my hands, and all came to the same conclusion: Must have kibble! Must have kibble, now!

I ran, positioning myself near a portion of fencing that was already down. I waited. In a flash, they had all gathered on the other side of the downed fence. Careful guidance through a fence helps reduce the chance that some laggard gets confused and then caught behind a portion of the fence still standing. When I move the sheep, I try to make sure they are all offered a nice, clear, and simple path towards whatever their destination is.

I moved into position. A leader sheep made the first leap over the downed fence, and then the whole flock came charging into the paddock. They surrounded me—a crushing mass of bodies. It was difficult to keep my feet in this position, and I have been knocked over previously. I widened my stance and bent and swayed with the bodies as they jostled around me. They all Maaah!ed in a deafening cacophony.

These sheep were trained. At least somewhat. I turned towards the feed troughs in the paddock and pantomimed a few shuffling steps towards them, pushing against the moving mass of wool. MAAAH! The sheep caught the hint and zoom!, the great majority charged to the feed troughs. No sheep wanted to be the last to the kibble bins.

A handful of sheep did the calculus and realized they already lost their position at the troughs and thought, Well, A bucket in hand is worth two buckets in the trough (to abuse another idiom). They ran back to me and resumed pushing and shoving to be near the dude carrying the precious manna of earthly delights.

At this point, I gave up trying to execute this process cleaning and refocused on the objective: gotta get that fence up.

I turned, found a path of least resistance through the flock, pushed, laid down a line of sheep-crack directly onto the grass, and then lept away as best I could to avoid the feeding frenzy.

I just barely maintained my footing and sprinted (fast lurched) to the fence and started stomping fence posts back into the ground (about eight or nine were lying flat). I was not successful in getting that fence to embed in that gravel . . .

Dammit. I forgot the mini-sledge.

I jumped to my feet, ran into the house, grabbed the 2-pounder, and ran back outside.

That half-a-bucket didn't last long. The sheep were just about finished already. I didn't have much time before they would be charging straight through the downed fence again.

A few sheep came up behind me. I raced to the next post. I got a lounge chair to prop up the bit of fence in the driveway.

Several sheep were moving down the fence line where they had previously crossed and turned towards me as I worked. Soon they would move past me and would be able to escape. I worked faster.

Next post—in the ground! After a couple more, I got comfortably ahead of the sheep and then got the last couple of posts in. Whew!

I stood up, checked the fence, and looked back at the flock. They were all staring at me. Then they issued a dimissive Maaah!. As if they collectived shrugged their shoulders, they turned and started munching on the grass before them.

I went back inside, flopped on the couch, groaned (the sound of old leaving the body), and thought, Man, I could really use a nap.