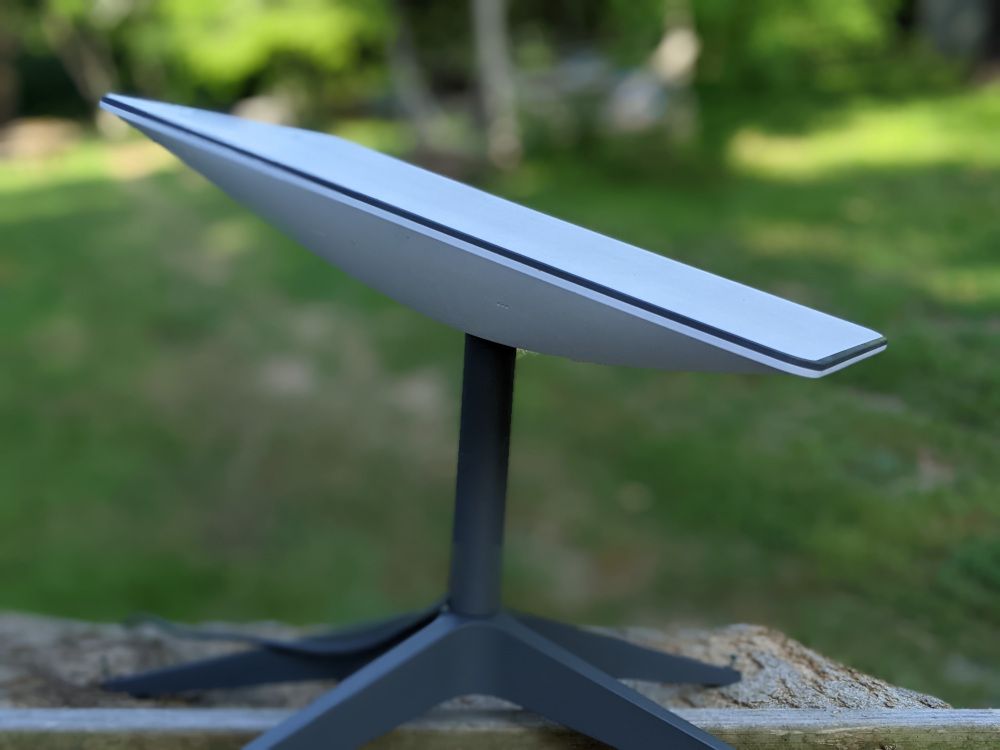 Rural living can be idyllic: It offers space, seclusion, quiet, fresh air, and is far FAR prettier. And it’s just so much cleaner! Bonus: you are far less likely to experience conflict with one of your neighbors. Often, country life also represents a cheaper lifestyle.

There are a few tradeoffs, though. For one, yardwork may be non-trivial. Your commute may also be rather significant. If you use public transit, you will likely need a car just to get to the route’s starting point. But folks work through that stuff. These are not new problems. The big tradeoff that plagues rural homesteads today is access to high-speed internet. Or the lack thereof. And this lack of quality access is a real drag on rural economies, childhood development, and more.

In the late ’90s, internet access became a necessity. Now, when dial-up was the standard, everyone—rural, suburban, urban—was pretty much on an even playing field. But then high-speed internet arrived. Dial-up was adequate for a short while, but as the speed of data transmission increased, so did the complexity of the websites being served. For a time, the majority of rural America was essentially internet dark.

Some rural residents simply did without. Their kids used resources at school. Adults used resources at libraries, cafes, and their places of employment. Rural folks limped along. For others, the problem has become so acute that they simply gave up and moved instead of fighting through the problem.

Then the pandemic hit. Millions of people who were limping along suddenly found themselves stuck at home with few options. Expensive options, no less.

There are high-speed options, but they are expensive, limited, slower, and often deliver a poor user experience. Until recently, the only real options were: satellite, DSL, and cell—depending on location, sometimes only satellite.

Not only is DSL availability location dependent, but so is the speed. Here, DSL speeds are slower than satellite. Also, DSL is often expensive, especially for the installation.

A cell signal is also location-dependent (cell tower required!). Cell throughput speeds are slower than satellite, and hotspot plans are data capped. At least Verizon’s is (the only option for us). Once that data is exceeded, they slow the data speed to mostly unusable until the next billing cycle. 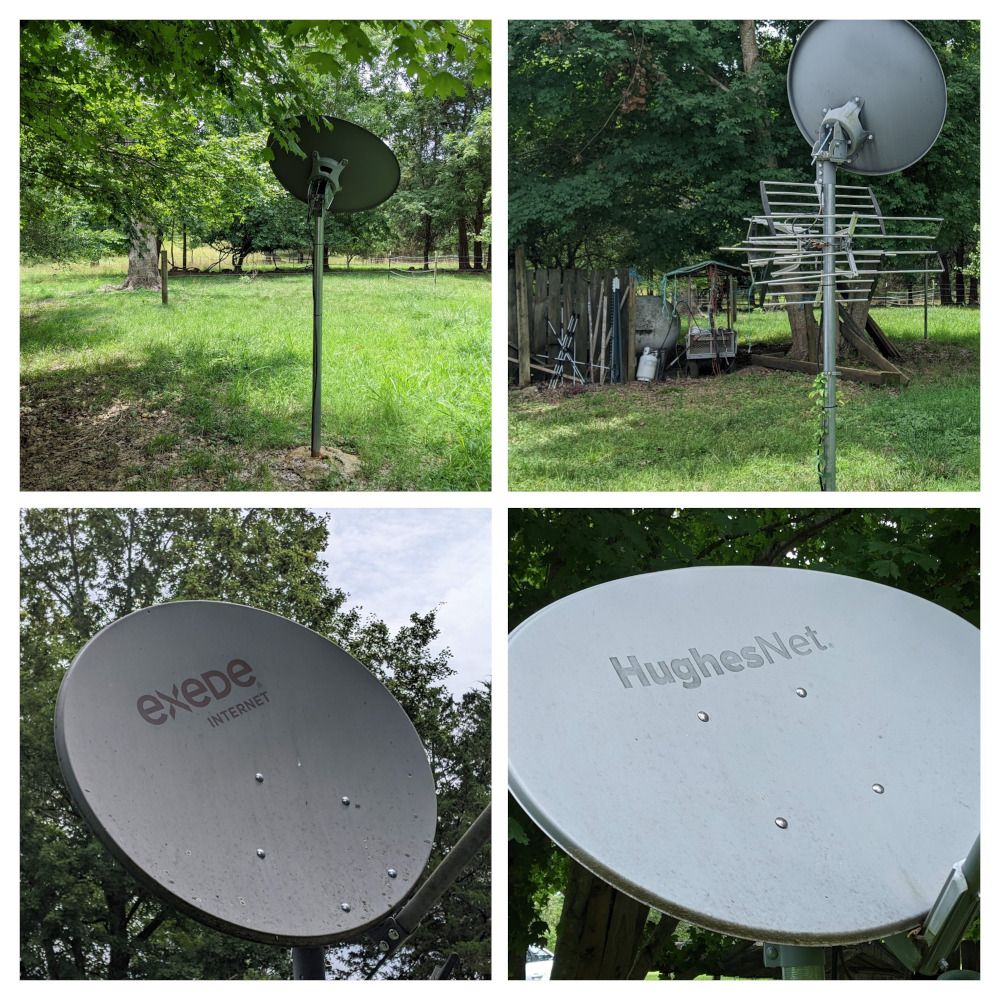 So, at our house, for the past eight years, the internet has been provided by ViaSat and HughesNet. I would describe satellite internet as just barely good enough. The speed was reasonably fast (fast enough). But data consumption was capped: When we ran over our limit (usually on week three for us), the service provider slowed down the data rate to merely painful but not unusable. From 2 a.m. to 8 a.m., the service was not capped at all (woo!). We could also purchase more gigabytes of data for the month, which we often did.

Sometimes I just tried to get all my internet-heavy work done in the wee hours of the morning (those 2 a.m. to 8 a.m. bonus hours could be a lifesaver). We enjoyed no streaming media. (Netflix still delivers entertainment via DVD!!!) Pandora? Youtube videos? Extravagances!

Though satellite internet speeds were decent, the big usability challenge was dealing with latency. Latency is defined as the time it takes for a call-and-response between a router and a satellite before the flow of data can commence. On a single load, many websites will initiate many connections, each requiring a new call-and-response to that satellite way up in the sky. (Just imagine how many requests Google Sheets makes when rendering that spreadsheet for you.)

What this means: Complex websites are slow or sometimes don’t even work. Video-conferencing and voice-over-IP calls can encounter significant delays.

We begged off conference calls at every opportunity. Voice-over-IP phone calls would have a noticeable 3- to 10-seconds of lag between hearing the other person speak and them hearing your response. Painful. I worked in the tech industry for years, where most of my day involved attending phone-in and video-in meetings. I did a lot of listening. I drove to a cafe if I knew I had to be truly engaged.

Eight years of that! Ugh.

Oh, and did I mention that satellite internet is a bit pricey? On average, we spent roughly $225 to $250 per month on sub-par internet. 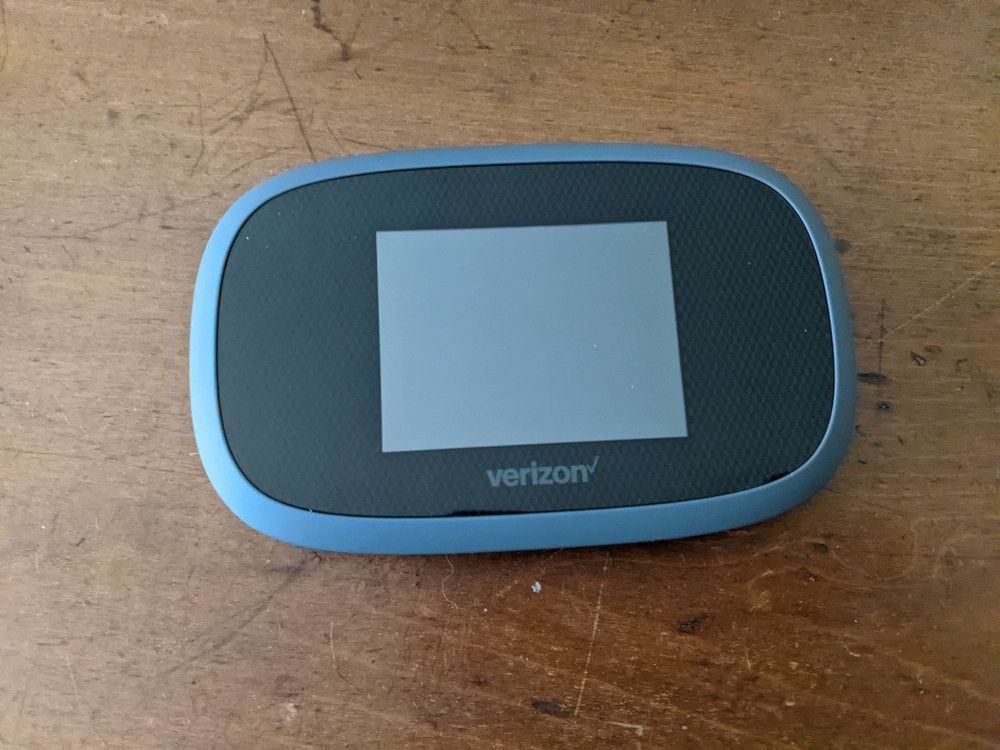 This past year, we noticed that the Verizon cell signal at our house was most reliable on the second story on the east side. Weak but reliable. Woo-hoo! Cell is slower than satellite, but at least we would not be burdened by that latency issue.

Verizon would not support whole-home cell internet in our area, but they did have a portable dedicated-device hotspot option. Boom! Good enough! Satellite internet service canceled!

With two or more of us using the hotspot at any given moment, it was not very speedy, and sometimes it would overheat and shut down. But it worked! Sadly, Verizon didn’t have a nighttime data grace period. Even with a larger data cap, we always ran out at least 4 or 5 days before the end of the cycle. Painful! 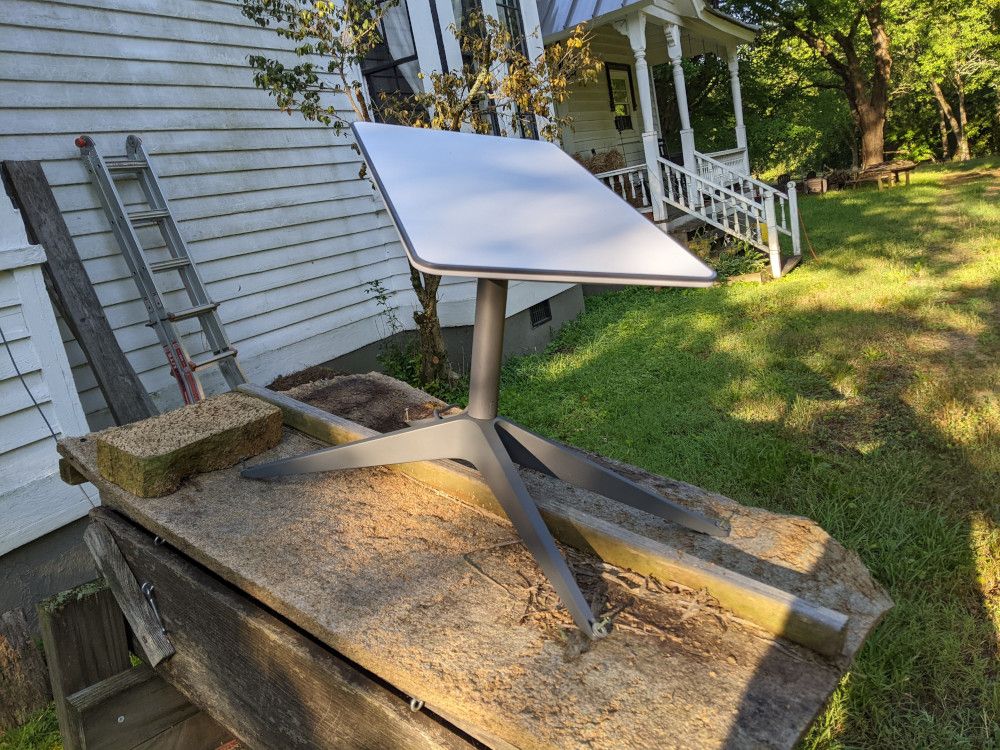 On June 25th, after over a year on the waiting list, a black box arrived. It was an antenna and router to enable the Starlink low-earth-orbit satellite service. Starlink is a service provided by SpaceX, one of those new private-sector rocket companies.

The traditional satellite internet services we have been using worked via a directed satellite dish in communication with a satellite in geosynchronous orbit 22,300 miles above the Earth.

A Starlink antenna (calling it a dish is a stretch) communicates with a matrix of satellites orbiting around the Earth. But these satellites are only 210+/- miles above our heads. Latency is orders of magnitude improved in comparison, and since there are many satellites, speeds are really darn good.

One big caveat with Starlink is that you need a relatively clear view of the sky in all directions (clear to the north seems to be the priority). That’s not so difficult if you live in the desert, but we live in rural temperate North Carolina, and that means . . . trees; trees everywhere.

For testing purposes, we just stuck the antenna outside on a table on the north side of the house (see the previous photo) and flipped it on.

It worked! And it worked well. Except when it didn’t. Far too many obstructions. Unlike traditional satellite services, the gap between the trees was just not good enough. This antenna had to go on the roof. This initial failure made me nervous, though. The trees surrounding our house are taller than the house—on all sides. 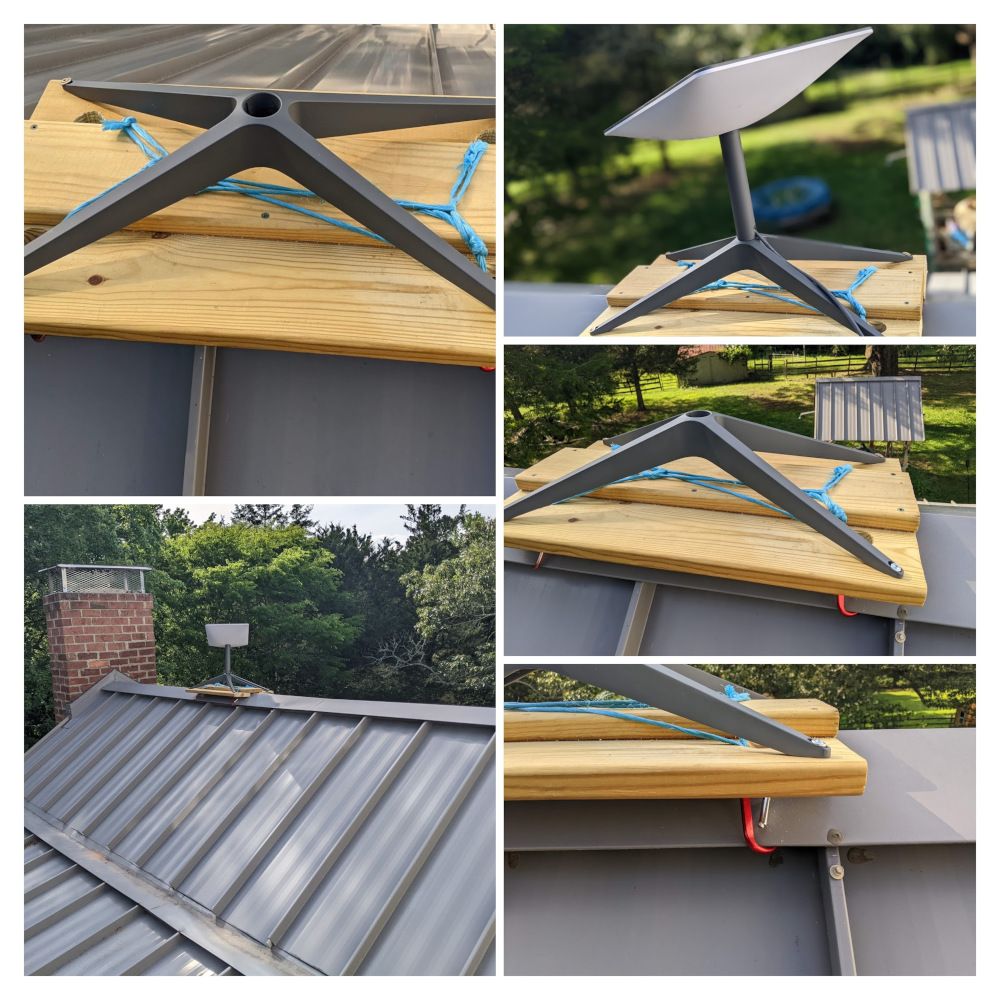 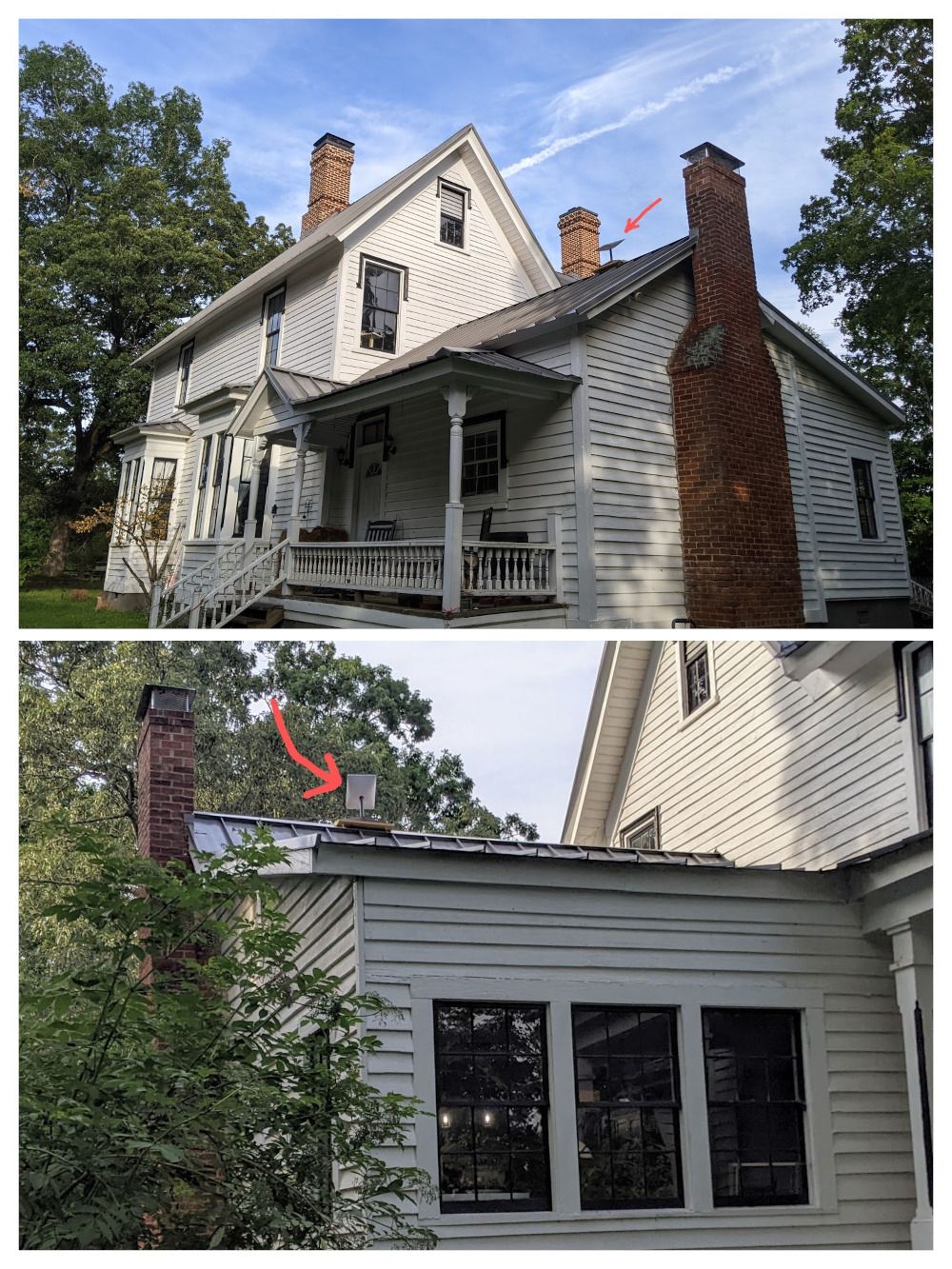 The correct method of mounting the antenna would be to stick it on a long pole (a mast) strapped to one of the third-floor chimneys. (A) This would require a pole, a mount, grounding wire, and a way to strap it to a chimney. And (B) those third-floor chimneys were way WAY up there on a sometimes slippery steep-sloped roof. So, no, we weren’t doing that until we proved the concept.

For round two, I jerry-rigged a wooden platform strapped to the metal roof. I essentially Boy Scouted the sucker to the second-story roof. It wasn’t ideally located, but . . . we remained hopeful. Obstructions included the third story of the house on one side, a tall tree and chimney on the other, and partially-blocking trees north and south.

First of all, I have to say that I was kind of proud of my mounting handiwork. It was meant to be temporary, but I think it could theoretically hold for years, if required.

Even with all that obstruction, service was much improved. The Starlink phone app indicated some minor outage every couple of minutes for a second or two or five (micro-outages). Still, the service was usable enough that we ditched the cell hotspot we thought we’d have to use for backup. We experienced the occasional 10+ second outage. This made voice-over-IP and video-conferencing calls sometimes very annoying, but if nothing else changed, this would still be a giant step up from what we had before. 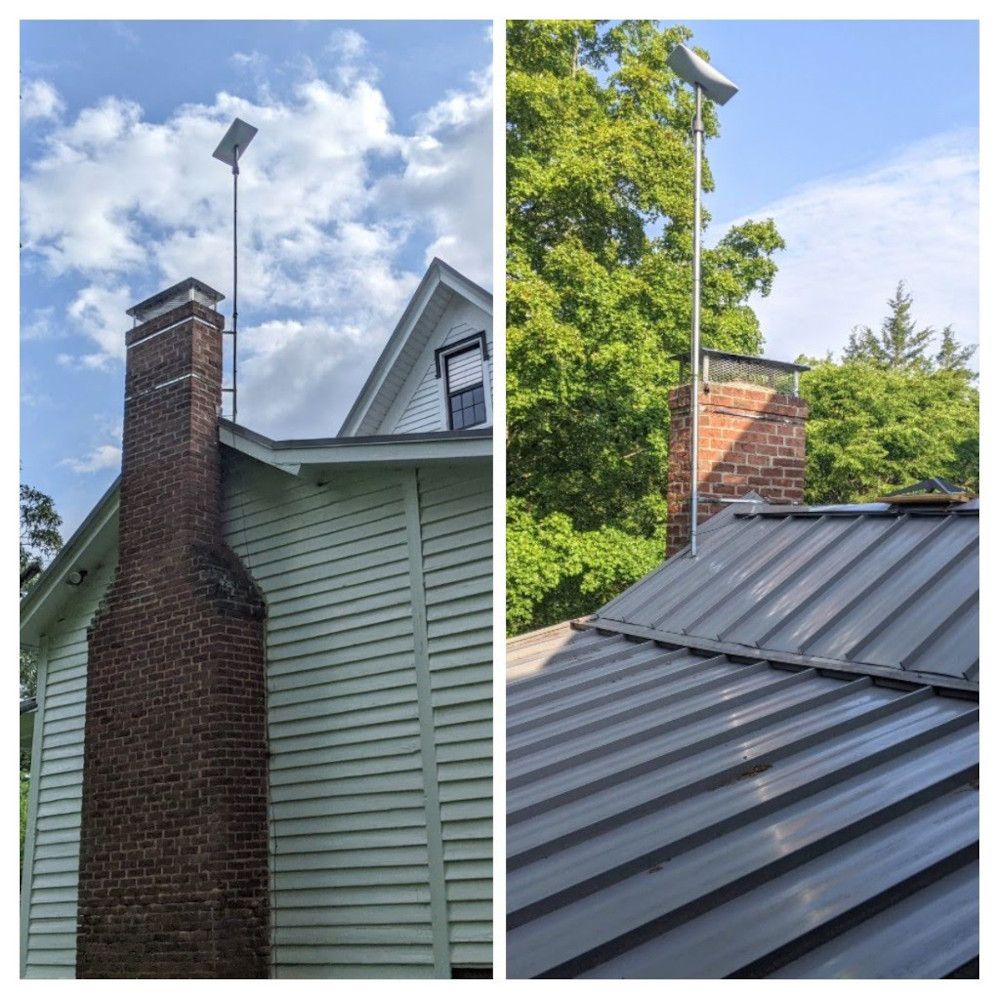 My makeshift platform was a good enough, but temporary, solution. The next step was to mount it to a chimney. I could not safely mount it to a third-story chimney. The second story would have to do. If that wasn’t sufficient, we’d hire someone to take it higher.

We ordered a pipe adapter (took a week), and I researched mounting things on an antenna mast.

I was hoping for 30 feet, but that was utterly unworkable as a solitary dude putting this stuff together and working on a slick metal roof. Instead we chose to use a 10-foot pole (1.25” EMT conduit). We mounted it to the chimney with antenna chimney mounts (they are a thing!). We drove a copper-coated grounding rod into the ground at the base of the chimney. We then strung a grounding wire from the mast (the pole), just under the antenna itself, to the grounding rod.

Ideally, we would have some means to ground the cable between the antenna and the router in the house. Unfortunately, that cable is something unique that I don’t know how to deal with (and I could find nothing helpful on the internet). Instead, we bought a $100 UPS with robust surge protection, and we’ll hope for the best. (Is this the thoughts and prayers version of electrical safety?) If the house generates a surge, the router should be protected. If the surge originates from the antenna . . . Well, it’ll probably be toast. But we are hopeful. And we are optimistic that perhaps the grounding wire will redirect any electrical fury away from the electronics. If lightning strikes it, mind you, everything will be fried regardless. 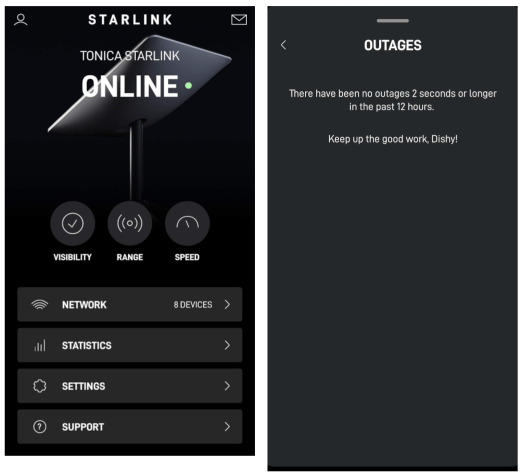 We mounted the antenna, flipped it on, and WOW! Just ten feet higher than the last mount position, and very nearly all obstructions just disappeared. On the first day we went almost 24 hours without an outage due to an obstruction. We went 18 hours without a noticeable outage of any sort. (We did have a short 3-second outage due to a confused or faulty satellite.)

So. Starlink FOR THE WIN! Let’s just hope this service maintains this use experience for the next several years. In our attempt to get away from traditional satellite internet, we spent hundreds of dollars on the cell hotspot and service and then about twelve hundred dollars setting up the Starlink service (Starlink equipment, antenna mast, mounts and clamps, grounding stuff, and a mesh router). It could have been five-thousand dollars, though, and we would have paid for it. Twelve hundred is nothing to sneeze at for folks on a constrained budget. Still, this service is a game-changer for rural America.

I should note: Elon Musk (the founder and visionary of both Tesla and SpaceX) does not seem to be the greatest person in the world. Maybe his douchebaggery is balanced out by this clear act of goodness. Personally, though, I would eagerly give him a long, lingering, open-mouthed kiss right about now if he asked for it.

We have internet! I think I will listen to a bit of Pandora while I work today: so bougie!

And now, for your pleasure: Outtakes! And a goat! 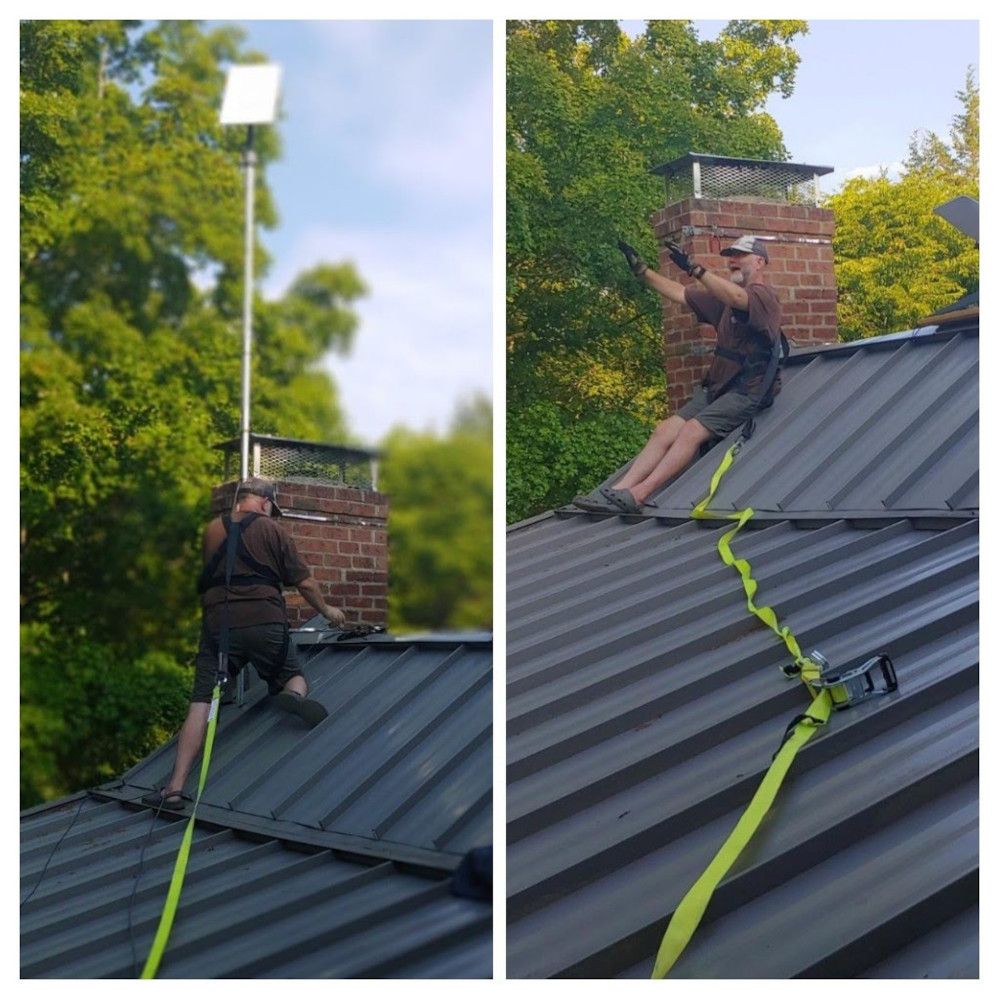 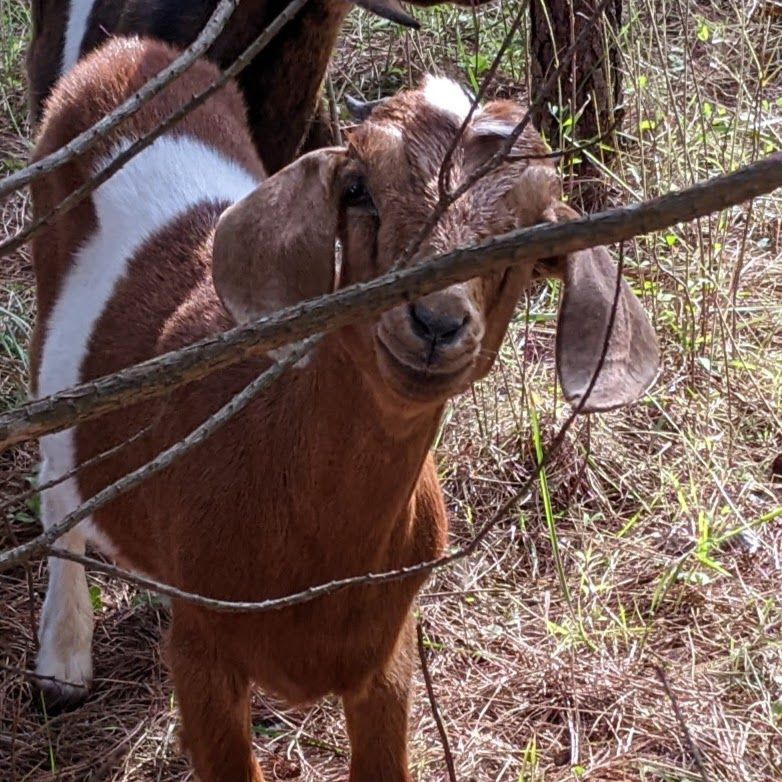