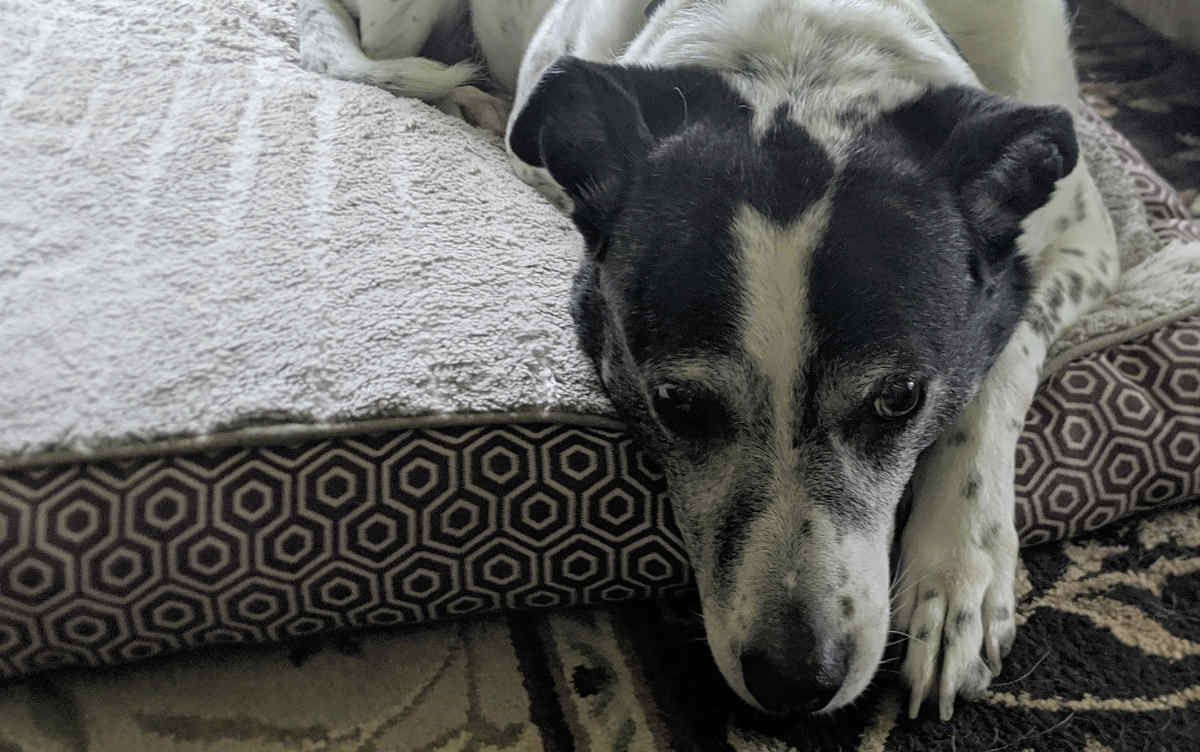 We live in the country as y'all know. On a wee little farm tucked away in the northern Piedmont of North Carolina. We are not all that far from the Virginia border. It's relatively quiet, but we do live one hundred feet or so from a two-lane roadway that is fairly active. In my opinion far too active and if we ever buy again (won't happen) we will certainly distance ourselves from any significant roadway.

We had a rainstorm today. One of those on-again off-again deluge-ish rainstorms. Usually this is rather uneventful, and in fact, rather pleasant given we have a metal roof and a three story farmhouse. When the rain get's going, it's pretty, and a bit noisier than your typical home. But in a pleasant way. It's hard to explain.

So, it was pouring down rain and at some point, our dog, Lady, lept to her feet and started barking, pointed in some arbitrary direction. She was clearly confused. Now, you might think, "Well, she's a dog; dogs bark at things." True enough, but we have had many rainstorms in the past, all without requiring our beloved pup bravely attempting to defend the house from the wrath of some sky god. In fact, if she wakes up to a rainy morning, she usually does what we do and lays there enjoying the drone of water hitting the roof and fall back to sleep. But unlike us, she has to pee outside, and Old Lady Lady will be damned! if she steps outside in the wet and muck. She will hold her bladder for as long as it takes to avoid getting a single drop of water on her delicate lady-fur. We have clocked her to 16+ hours of bladder control before she can't stand it any longer and must brave the weather. It's almost a superpower.

Lady was an acquisition. Acquaintances of ours begged us to take her in temporarily while they figured out a housing situation. But then, six months passed, they solved the problem and decided they really didn't want the dog back. They didn't ask what we thought of this. Surprise! We had a new dog.

Yes, I am slightly bitter about this—even today—but I can't do anything about it now so . . . We grew to love her. She slowly weaseled her way through some crevice on the bricked-up wall I erected to protect myself in the event we had to give her up. She wasn't a dog I would have picked, but she picked us in a sense, and . . . well, she is now part of the family.

We do love her, but she is most definitely one of the dumber dogs on the planet. Hey, before y'all get defensive: There are stupid humans and there are stupid dogs. And I'm sure among our thirty sheep some are dimwits and others are geniuses (I have my suspicions for each). So, Lady is not overly bright, and just like with stupid humans, they need extra care. She has trapped herself in various pastures innumerable times to the point she is now afraid to venture into one. Never mind that in every single case, all she had to do was go out the same way she came in. Her dimwittedness manifests in a myriad of other ways. Having a stupid dog as part of the family was new to us since most of our previous dogs have been on the bright side. One of which (our Australian Cattle Dog, named True—since deceased) was the smartest damn dog I ever met. I always joked that all of our dogs (until Lady that is) were rather clever, but True could do calculus.

She's not bright to begin with, and now she is old. Lady is twelve. Age robs the mind of nimbleness. We become more easily confused as we get older. And of course, our senses are not as acute as they once were. Dogs are no different. And a 12 year old dog is geriatric. Some of us age gracefully, but others . . .

Physically, Lady is far younger than her years. She can see rather well. Her hearing is spectacular, and her general physique is unusually fit for a dog her age and size. She's a seventy-pound dog and still runs and plays like a dog four or five years her junior.

But her mind. Her mind is starting to slip and you feel a bit powerless to compensate. At first it's almost endearing—"Oh, poor puppy, no one is there."—but later it can be heartrending to see a pup in the midst of confusion, and worse, fear. Sometimes even anger and defensiveness.

With a human you can at least talk through confusing moments and understand their confusions and fears. A dog though, there just isn't any reasoning with a dog. There are times she just starts barking. Sure, sometimes, some far off noise has triggered her defense response (but then, in the past, those noises were ignored), but it's becoming increasingly obvious that she often barks at imaginary foes.

We used to simply try to hush her. Now, more often than not, we simply let her outside. She will go charging out to confront the invade, only to spin in circles in confusion then look up at you as if, "But Daddy, I swear! . . ."

The cattle dog, True, I mentioned earlier went through all this, but then grew deaf and she stopped responding to, well, just about everything. I am not sure which is worse. Lady's demons are imagined, but at least she is in engaged.

Our pup is getting old. I suppose we should count our blessings that she doesn't have any other significant ailments. Unfortunately, her mental slide is a constant reminder that those issues are coming, and, of course, a reminder of how tenuous life and vitality are.

At least she has hung on to some of her youthful habits. She still gleefully chases her tail like a fool, and every fart is a new surprise every single time, spurring to leap up and run away from herself. We have to love our pups. Even our most special, and now aging, pup. Keep chasing that tail, Lady.