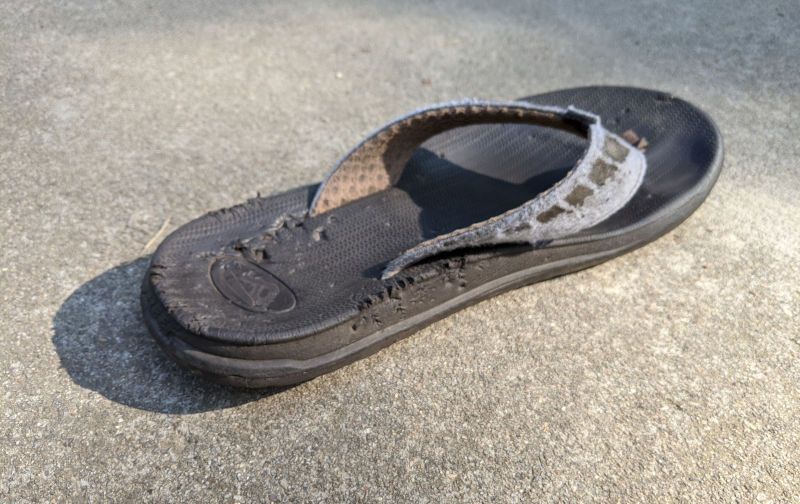 I don't remember the lecture. Maybe it was How to Make Millions Writing Fiction; or Beginnings, Middles, and Ends; or Colons, Semicolons, and the Oxford Comma; or the ubiquitous The Hero's Journey. I kept nodding off. We got there in a rush, and I didn't have enough sleep the night before. I never got enough sleep. I was forever sleep-deprived.

We were seated in an auditorium, maybe five rows deep. The lecture ended, and everyone stood to leave. I collected my things and began to stand up. That's when Will put a hand on my shoulder and gave me a gentle push, just enough to rock me back into the seat.

"Maybe you should wait for everyone to leave."

I stopped and looked down at my pants. Except, there were no pants. Instead, I was wearing boxer shorts, a tank top, and flip-flops. My face turned beet red. I thought to myself, Not again! And then I followed that with: 'Not again?' Wait, has this happened before?

Will started to walk away, then looked back, "Let them clear out and then meet me at the car."

"Can you just pick me up out front—" but he was already gone. Probably too embarrassed to be seen with me. He didn't want to be labeled as 'that guy with the guy without clothes.'

Everyone had just about cleared out when to my horror—like a dam letting loose—people pored back into the room, setting up for the next session.

In a panic, I froze. I knew the longer I waited, the worse things would be, but sitting there, with my bag on my lap, meant I could delay the embarrassment for at least a few seconds longer.

Someone tried to squeeze by in front of me. I scooted my knees left then right, but there wasn't enough room. I had to stand up.

Oh god. Time to jump in the pool, so to speak.

I stood up and let the guy pass. A murmur erupted in the seats somewhere behind me. I straightened and tried to act like nothing was unusual—just a dude in his underwear. My confidence wavered and I scurried down the row and then to the front. I looked back from where I had come. Mistake. All eyes were on me.

I wanted to say, "Hey, it's not like I'm in my tighty-whities." But I knew that in front of an arresting officer, the difference between tighty-whities and loosey-whities was likely very subjective.

Fake confidence abandoned, I hung my head and scooted towards the door. Adding insult to injury, we had sat on the left side of the room, and the exit was on the right. I paraded in front of the entire assembling auditorium. I felt so exposed, I might as well have been naked instead of half-dressed.

At some point in the process, I lost a flip-flop. Cutting my losses, I crossed in front of the audience and headed towards the door. The murmuring graduated to a dull roar. I would have gotten out clean, but I ran into the next lecturer racing to get to her session on time, an open laptop in hand and a bit out of breath. She was so preoccupied she didn't notice the conference pariah attempting to zip by her.

"Are you here for the Fiends in Dark Places session?" she asked.

I muttered something under my breath, hit the door, and was out.

The conference halls were slam-full of people wandering about, looking for sessions, or catching up with friends and comrades. I kept my head low, aimed at the exit, and walked as fast as I could, trying to keep the one flip-flop from flipping (or flopping). Flop step flop step flop . . .

People parted for me like I was lit on fire. Like if they got too close, maybe they too would go crazy and rip their clothes off.

Like a rolling wave of silence, conversations stopped as I strode by. Then all at once, after I passed, conversations picked right back up again, but with a topic change: the creepy middle-aged man striding through the halls in his underwear and one flip-flop.

This is a writers' conference, I said to myself. There's probably a half-dozen grown men and women dressed up like some Harry Potter character here. How weird is a dude in his underwear?

I answered the question for myself: plenty weird.

I made it to the exit. I crossed the plaza at a stumbling jog. There was no Will in the pickup area. Damn him! At least it was after dark and still warm out. I crossed the street and ____-flopped into the parking garage.

Wait. Why was it after dark? Didn't we just get to the conference? It should be morning. My mind was a fog.

I couldn't remember where we parked. I don't even really remember arriving with Will, oddly. You'd think he would have said something. Did I jog here from the hotel? In my underwear? I couldn't clear my head.

I pulled out my phone. Dead.

Of course, it's dead, I thought. We drank last night. I crashed hard and was running late. I never charged my phone. I also never managed to get pants on, apparently. Why hadn't Will said anything? Maybe he did . . . Was I really that hungover?

I walked up the garage ramp entirely too aware of how grimy the cement felt under my one bare foot. I couldn't even think what Will's car looked like. At this point, I was focused on simply moving forward—one foot in front of the other. I didn't know what else to do. I was some weirdo in his underwear. Worse, I was a middle-aged weirdo in his underwear. Society crafted special punishments for people just like me. I really wanted to go home.

I trudged up each ramp, the next level emerging to my left, then at the end of the ramp, I would turn left then left again, and then march up the ramp on the next level. A glass wall extended half the length of the divide between the ramps.

The garage was empty of people. The lower levels were full of cars but devoid of people. Fine by me, I thought.

Before today, I had never really given much thought to that wholly indiscreet little flap in the front of men's boxer shorts. But at that moment that flap was all I could think about as two very young, very attractive, and very clearly disturbed women scurried by trying not to look at me while I tried not to look at them.

"Jesus, Will. Where are you?" I muttered.

At this point, I figured I was reduced to aimlessly wandering. I lost confidence that Will was even in this garage. Where was I now? Level five? Level six? There were only eight levels. Neither one of us liked to park with the crowd, but parking density had thinned out two levels down.

I took another left and marched up what I presumed to be level seven. At the other end, a few parking spots from the turn that led the final level, headlights were visible through the glass partition. Or at least they looked like headlights. The glass partitions were nearly as grimy as the concrete flooring.

I approached. A figure was visible behind the clouded partition. He (or she?) was pressed up against the glass, hands cupped around his eyes, trying to better see me.

The figure pounded on the glass and waved.

Relief flooded over me, and I quickened my pace.

I rounded the bend. "Will, I'm sorry about all this but why didn't you—"

I stopped. Will drove something I couldn't remember, but it certainly wasn't the late model monstrosity of a sedan parked twenty or so feet away with its engine idling. You could hear a slight hiccup; probably needed a new spark plug. The driver's side rear window was a sheet of black plastic, a trash bag, duct-taped to the doorframe.

A young man stood between me and the car. He stood with a wide stance, hands outstretched. Jeans, a t-shirt with some slogan on it, and a mop of what looked like greasy light-brown hair shaven skin tight on the sides and long and wild on top.

In his right handm he held a long knife. But that is not what bothered me the most. It was the grin on his face—a predatory grin.

The garage was dark, and we were very much alone.

My heart was pounding out of my chest, and sweat broke out all over my body.

He chuckled and started walking towards me.

I turned and ran. My remaining flip-flop twisted off my foot and caught up on my ankle, making me stumble.

Time sped up, but then also slowed to a crawl. I could hear his footsteps behind me. One. Two. He was on me.

A bolt of searing fire in my back, and I knew this was it. The world spun. Two final thoughts pierced through the pain: 1. I was going to die here, in my underwear, in a parking garage, and all those things would make Monica sad, and 2. Was it too much to ask for you to bring the car around, Will? I mean, what the hell, Will?

I sat bolt upright. My heart was racing as I tried to get my bearings.

4am. Thank goodness. Just a crazy dream, and I was safely in my warm comfy bed next to my beautiful wife.

I immediately wrote down what happened and then texted my friend Will with the summary. Later, he replied that he would have probably driven away from some guy in his underwear and flip-flops, even if that guy was me. Perhaps the garage-dwelling thug killed him as well.

Anyway, that was my dream last Sunday (July 5th). I kinda wish I had the Naked at the Walmart™ dream instead. Still embarrassing, but less violent.

Is there a moral to this story? Probably not. Or maybe, I suppose: when lying down at night, keep a pair of running shoes next to the bed.

But I mean really, What the Hell, Will?